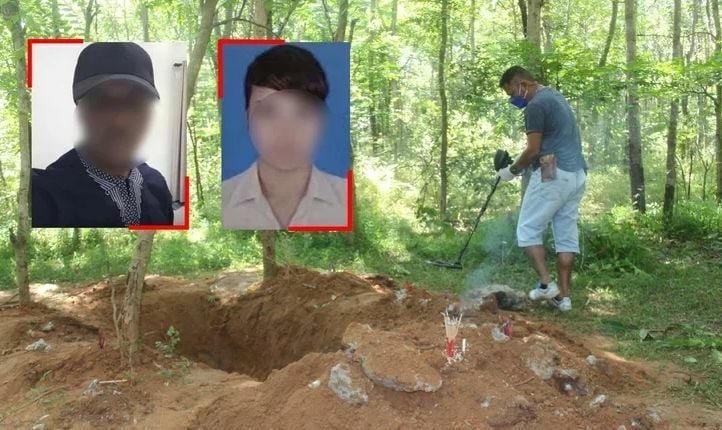 Today, Thailand’s national police chief has said that the two might have been linked to a major transnational crystal meth trafficking gang. The chief, General Suchart Teerasawat said this is based on information exchanged with a neighbouring country, which he did not name. Suchart said the house where the couple had lived in the other country was a suspected transit point on a smuggling route.

He added, however, that investigators are not certain whether international traffickers would have gotten directly involved in their murder, and further investigation is necessary.

The couple’s names have also now been reported. The woman is Nguyen Thi Van, and the man is Anabon Chka Hen. The victims’ relatives have given accounts indicating that the two were lovers, Suchart said.

Anabon’s relatives have not yet picked up his body. His older brother had contacted police, and had initially confirmed Anabon’s identity from photos and dental records. Suchart said the work is still not completed.

Nguyen and Anabon’s bodies were first discovered by a local villager foraging for mushrooms in a forest in Nakhon Ratchasima’s Chok Chai district. The bodies were naked, and each was covered with a thin layer of concrete. Police found cartridges and bullets close to the grave.

Police had tried to identify the couple by examining the woman’s tattoos, and her silicon breast implants. Thanks to the implants, police were able to track down the silicon’s manufacturer. They later found the silicon lot number sent to Vietnam, and contacted the Vietnamese embassy to check the dead woman’s fingerprints. They examined the man’s fingerprints as well, and were able to identify the couple.

Suchart says police are following up on the cartridges, bullets, and the source of the cement used to cover Nguyen and Anabon’s bodies. He said they are also reviewing surveillance camera footage from areas around where the couple was found. Police are checking about cars seen entering the area around the time the couple is believed to have been killed. The date of the murder is believed to have been July 17. Some witnesses have also provided clues about who had been in the area, but Suchart says the suspects still have not been found.