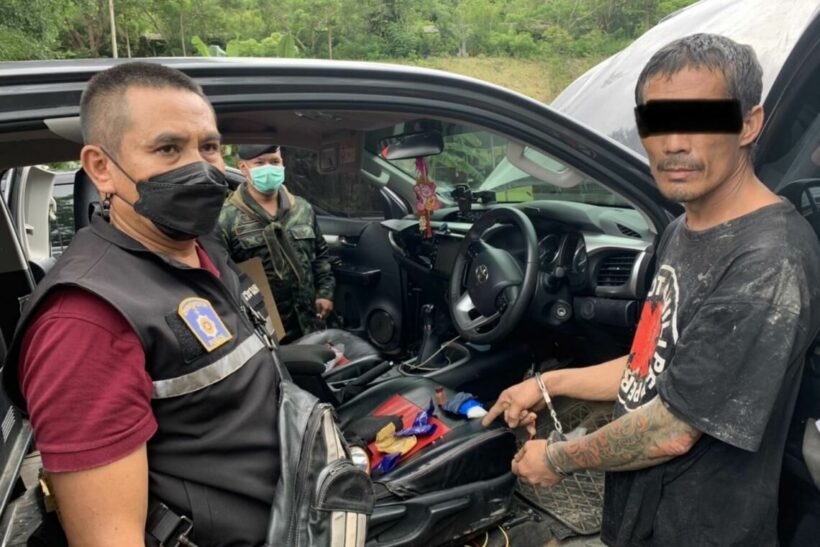 Yesterday, police and military forces in Thailand’s southern province of Ranong arrested a notorious hitman. The hitman, 41 year old Nirut Krajang, had fled to Myanmar when a Chumphon court issued an arrest warrant for murder. There, he worked for 4 months in forestry before his eye was injured and he returned to Thailand for treatment.

But coming back home forced Nirut to meet his match when the police and military forces waited to ambush him as he drove into Chumphon province. At a checkpoint, Nirut jumped out of his car and ran into the forest, but the police caught up to him. Nirut is now in the custody of the Pak Chan police in Ranong.

Police confiscated a gun from Nirut, as well as 320 yaba tablets and 26.5 grammes of crystal methamphetamine. Nirut was caught by Thep Satree special forces working with Ranong police and the military. The police had been following his case, and were able to track him down.

Nirut is known by his nicknamed ‘Toy Rap Ro’, the name of Chumphon’s sub-district where he is from.

Last year, police killed a hitman in Chumphon. The suspected hitman, 43 year old Thirayut Chukaeo from Nakhon Si Thammarat, had 4 warrants out for his arrest for 4 different murder cases. He had been hiding in a hut on a hill when police found him.