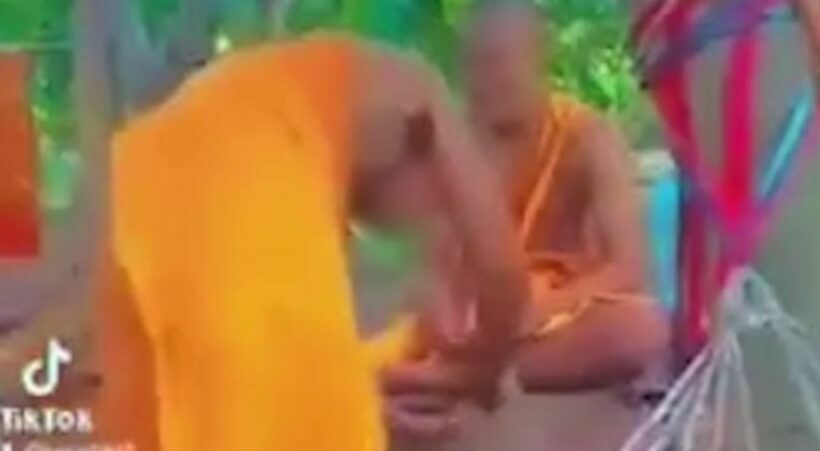 A group of novice Buddhist monks were kicked out of the monkhood yesterday after they were caught smoking cannabis from a bong at a famous temple in Buriram province in northeast Thailand. The young men – who had been ordained for a total of 4 days – were taking part in a drug addiction programme jointly run by Thailand’s Buddhist Sangha and the court. The novices might have gotten away with getting high if someone didn’t secretly film their debauchery and upload the video to TikTok.

The 4 teenagers were ordained as novice monks at a temple in Muang district on June 16 on a 9 day drug rehabilitation programme. The programme was set up under a Memorandum of Understanding between Thailand’s Buddhist Sangha and the Criminal Court to help young men stop taking drugs.

After the temple caught wind of the TikTok clip, a mother of one of the novices – who would like to remain anonymous – said she got a call asking her to come to the temple. When she found out her son and 3 other novices were smoking cannabis, she said she felt let down that he couldn’t get through a 9 day programme without getting high.

The boy’s mother told KhaoSod how she felt…

“The Sangha’s programme is planned well. A total of 12 novices are looked after by 8 senior mentors to prevent incidents like this happening. But that day, there were 4 different events going on at the temple and some of the mentors were busy helping with temple work. The monks were left alone for a short while and that’s when it happened. We think it is a matter of their young age and also the fact that they received news that marijuana is no longer illegal in Thailand. It was done without anyone knowing.”

Although the programme is set to end on June 25, the saffron-robed bong smokers were asked to change back into their regular clothes and leave the temple immediately.