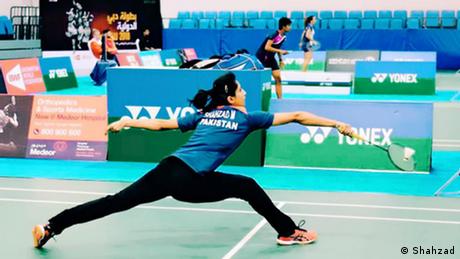 Mahoor Shahzad, a 24-year-old badminton player set to represent Pakistan at the Tokyo Olympics, is determined to make it big.

She is the Islamic nation’s first ever badminton player to qualify for the Olympics and is ranked among the top 133 women players in the world.

Shahzad was invited to numerous international sporting events last year but was unable to attend due to the COVID-19 pandemic. She told DW that getting selected for the Olympics has been “a dream come true” and that she is thrilled to represent Pakistan on such a coveted international platform.

Shahzad discovered her passion and gift for badminton at the age of 11, thanks to her father’s strong support and insistence, she said. Shahzad’s father, Muhammad Shahzad, himself is a former badminton player and encouraged all his daughters to play sports.

At age 13, Shahzad went on to win the national junior title, beating her older sister in the game. She then went on to become the senior national champion of Pakistan for the first time at the age of 19.

Despite having her family’s full support, Shahzad said she still faced many challenges which prevented her from fully realizing her potential.

“The major challenge that I faced (in badminton) was not being able to access many facilities as there are limited public courts and coaches in Karachi,” she told DW. So, her father is her primary coach.

“I was lucky to have my family’s support, unlike most women,” said Shahzad.

Noreena Shams, 23, is a prominent squash player and sports activist from Pakistan’s Northwest. The area saw clashes between Pakistani security forces and the Taliban in 2009. Her house was struck twice.

Shams’ father died at a young age and so she was raised singlehandedly by her mother. At the age of 15, Shams disguised herself as a boy so she could play cricket.

She played an entire year in the national junior team until her identity was revealed.

“It’s a very different situation for a woman without male backing as sports is so male dominated, people don’t take you seriously and try to take advantage,” Shams told DW, adding that it took her eight years to convince her mother that she was committed to a career in sports.

Overtime, Shams climbed her way up and is now a member of a number of sports bodies and federations. She said that many of her female peers have flagged abuses of powerto her.

“It disgusts me that I have to sit in meetings with men who I know have asked for sexual favors from other sportswomen, young girls really. I’m often the only woman in meetings and I’m trying to help my peers by raising my voice but I’m not always heard. The government needs to protect us,” she said.

Leena Aziz, a sports commentator and analyst, has been in the industry for 25 years. She told DW that there has been little progress to promote or safeguard women in sports by the Pakistani government.

“There is a lot of harassment that women in sports and sports broadcasting go through. There’s been suicides because women suffer silently or if they complain, their careers end. Outspoken women are punished and quiet ones become the favorite,” said Aziz.

Aziz referred to the case of 17-year-old female cricketer, Haleema Rafiq, who in 2014 committed suicide by drinking acid after putting forth sexual harassment charges against top officials of the Sultan Cricket Club.

The Pakistan Cricket Board (PCB) formed a two-member inquiry committee which cleared the officials of any wrongdoing and banned all complainants from playing for six months.

Aziz said that the government should set up a protection cell as well as provide psychological counseling exclusively for women in sports in Pakistan. She reiterated that the inequality and discrimination women face in Pakistan’s patriarchal society have led to less opportunities than their male counterparts.

Sana Mahmud, former captain of the women’s national football and basketball team, told DW that problems of corruption and the politicization of sports are also holding women back from playing.

Mahmud said many sports federations are built through political contacts — already dominated by men — which by default means women are not well represented in sports.

“Sports leadership is very weak, especially for women, because funds are misused and not fairly allotted to women’s teams, federations and events. Even if women are given a seat at the table, it is just a token seat without any real say or power,” Mahmud pointed out.

Mahmud, who also works for the NGO Right to Play, stressed it is important to encourage girls to play sports from a young age to see more gender inclusion in sports.

“If our culture stops girls from using their bodies to jump, run and throw, play — how will they even know what wonderful things their bodies are capable of? To have the next generations of sportswomen, we need to give young girls the freedom and tools to be strong and competitive just like boys.”