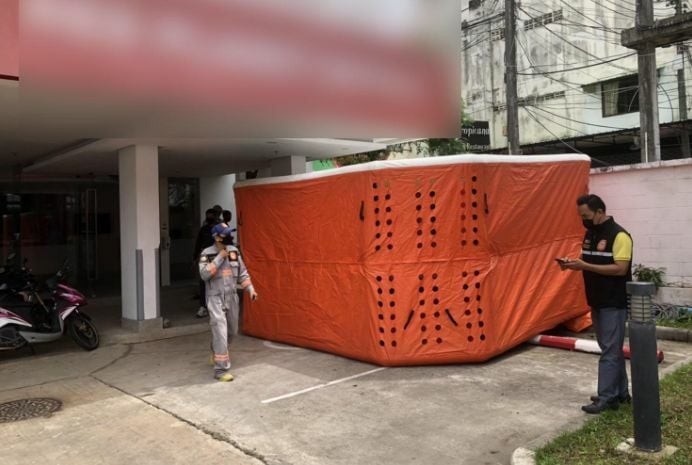 A Patong man was talked out of jumping from the fourth floor of a hotel yesterday. The unnamed man, who was around 35-40 years old, had been arguing with his 2 girlfriends, who he was in an open relationship with. The women knew about each other, and the open relationship had previously worked for them.

But recently, the relationship had been on the rocks. The man said he had a major argument with his first girlfriend. Then, he got into a quarrel with his second girlfriend yesterday while the pair was staying at the hotel in Patong. The man then went up to the fourth floor and threatened to jump due to the stress he felt.

Patong Patrol Police and rescue workers arrived at the scene to find the extremely distressed man on a fire escape balcony. A photo by The Phuket Express shows the man sitting on the balcony’s ledge. Rescue workers put an air mattress on the ground below that the man would land on incase he jumped. The police then went up to the fourth floor to talk to the man.

The police then called both girlfriends to talk with the man, and all parties agreed to calm down. The man agreed to come down from the fourth floor safely.

At least 250 killed in Afghanistan earthquake

Best Hotels in Pattaya for your Money’s Worth for 2022