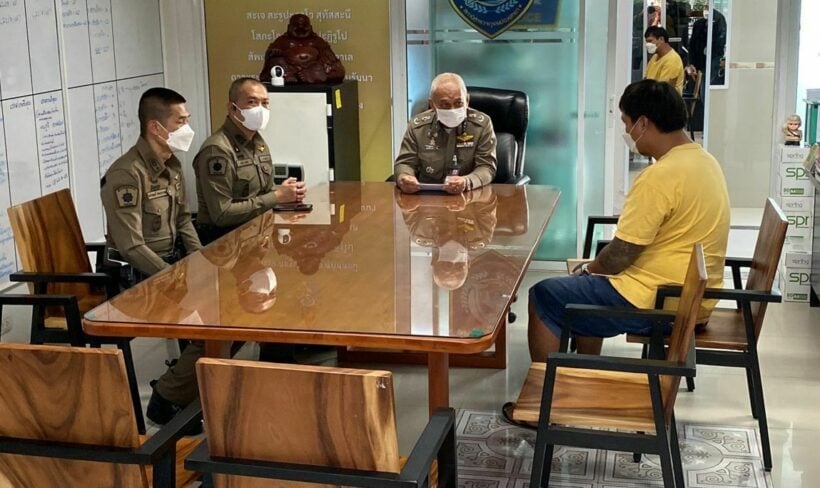 There’s been another gold necklace theft in Pattaya, but this time, no tourists or ladyboys were reported to be involved.

The thief allegedly nabbed a gold necklace from a Thai woman walking with her boyfriend in Chon Buri’s Bang Lamung district. He rode by the woman on his motorbike, snatched the necklace, and drove off. But Pattaya Police tracked him down, and arrested him at his house only 4 hours later.

The thief, 30 year old Theeramate Rasameduen, confessed to the crime, and said he was in financial distress from being jobless. Theeramate said he stole the necklace on a a sudden impulse, and accidentally dropped it along the way somewhere. He said…

“I want to apologize to the victim. I am at a dead end and do not know what to do.”

Police chief Kullachart Kullachai checked Theeramate’s record, though, and found that he committed 2 similar crimes in 2012 and 2016. Theeramate is now in custody, awating legal proceedings.

This year, there have been at least 10 thefts of gold necklaces from Indian tourists reported in the Pattaya area. Since many of the thieves have been transgender, a tourist police chief said last month that he needed to launch a new measure to keep records of all resident transgender individuals in Pattaya areas with criminal records.

One transgender foundation in Pattaya has expressed concern about stereotypes against the transgender community following the thefts. The Pattaya Sisters Foundation said last week that tourists are now being “noticeably vigilant” around transgender workers.

The foundation’s deputy director said this is strongly impacting transgender workers at bars and other venues, where tourists are now shying away from them. She said she suspects that the same group of people is repeatedly stealing from tourists.

Perhaps the recent theft by Theeramate is a reminder to not jump to conclusions.

The return of the most important coffee event in Thailand