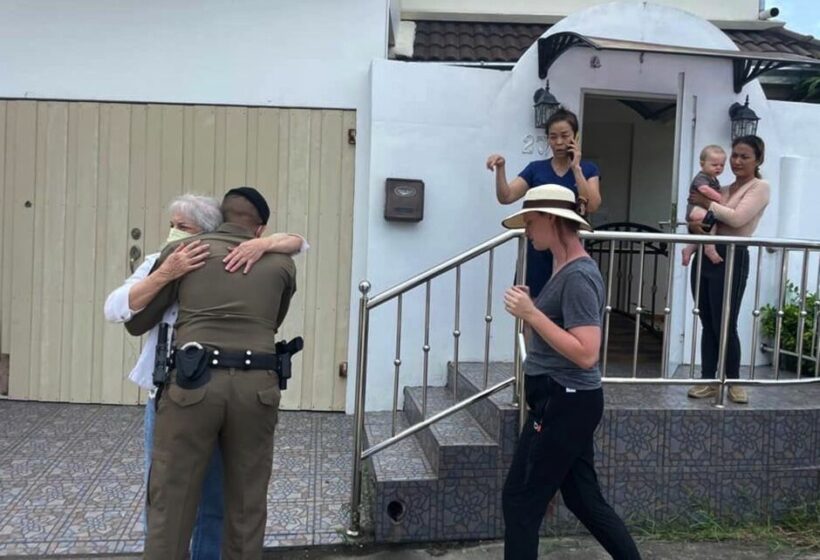 Pattaya Tourist Police have yesterday found an elderly American woman who went missing from her home in Bang Lamung district of Chon Buri province. The woman’s family had reported her missing the night before, after she had gone on a walk.

As the police were searching for the woman, Shirley, she came in to the Bang Lamung police station to ask for help. Shirley reportedly told the police she was lost, and looked confused. When the police saw that the woman’s identity matched that of the person they were looking for, they realised that they had found Shirley. The police brought Shirley home safely and uninjured, although she was exhausted.

In a photo from Pattaya Tourist Police, Shirley can be seen hugging an officer who helped her home. Her family was also grateful to the police for bringing her home. Shirley is in her mid-seventies, and it was reportedly unclear if she had memory loss issues. It’s also unclear where she wandered during the night.

A 70 year old French man went missing in a Chiang Mai forest in February. The man, Jacques Moriceau, was found the next morning in an abandoned temple in a forest. The man said he was driving to the French Embassy in Chiang Mai when he forgot the way home. His car ended up running out of batteries and he started walking to seek help, but walked into a forest where he got lost.

Like Barbara and Jacques, Shirley has been brought home safely to her family.