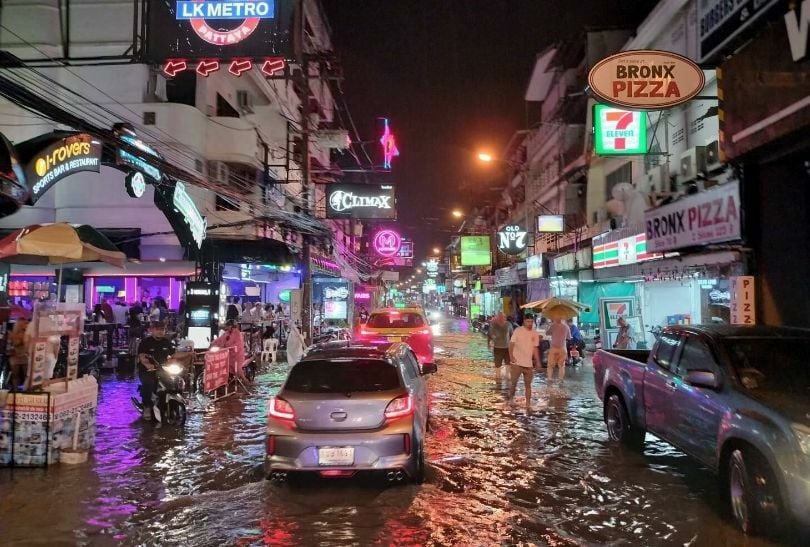 Many of Pattaya’s major roads have been flooded by heavy rain last night. Some of the affected roads are:South Pattaya Road, Soi Buakhao Road, Sukhumvit Road, and Beach Road.

These roads were all underwater with levels ranging between 20 centimetres to 1 metre,The Pattaya Newsreported.

Many popular alleys were also flooded. The floodwaters stretched onto roadside venues, forcing tourists to walk through them to get back to their hotels. Some of the tourists were reportedly dancing and singing in the rain in some areas, though.

Meanwhile, most motorbike riders had to wait for the waters to recede before they could finish their travels.

Pattaya’s mayor and officials were keeping a close watch on the situation, and said that after the rains had finished, flooding had levelled out across the city. The mayor and his team went out this morning to inspect the storms damage and clogged drains. The team ordered relevant agencies to help people who needed help.

In recent months, Thailand’s floods have wreaked havoc throughout the country. Earlier this month,hundreds of houses and buildingswere flooded in the Sri Racha district of the eastern Chon Buri province.

In Bangkok, some academics have suggested that the Bangkok Metropolitan Administration use incentives for land owners tooffer their land for water retention.