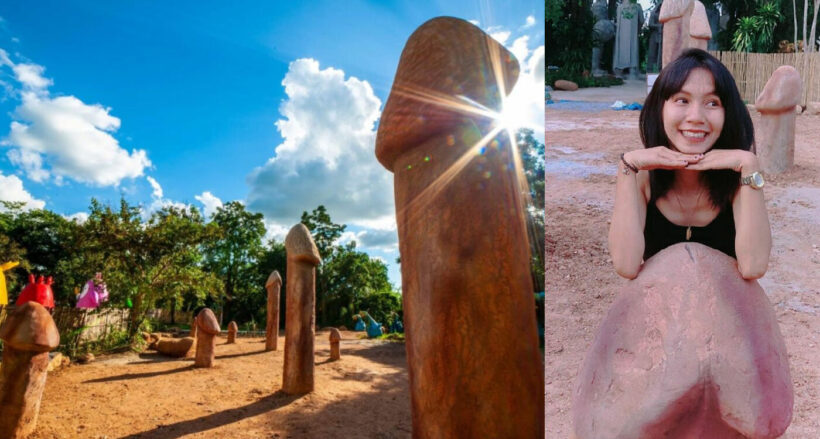 The Isan city of Khon Kaen is welcoming visitors to a unique tourist attraction: a park of giant penises. Traitep Dream Forest contains an area of the park called Thung Karjiew which translates roughly to Penis Paddock. The phallic park has been getting a lot of attention on social media and in Thai media, and some fear it may elicit a negative response from the conservative government.

In the Ubonrat district of Khon Kaen, the park and its strange attractions are being viewed by some as humourous and others as profane. But photos show it is full of visitors and, uh, members. The sign at the park itself tells an interesting folk tale story of why the park exists. The sign tells of Lahone, a deity who had a habit of sexually harassing people.

He was punished by dismemberment and having his genitals placed on display in a show of contempt for his actions. The park owner says that the park grew from Lahone’s penis put on display for all to see in order to humiliate him.

While the back story tells of a problematic diety, the park seems to be more for a bit of a kinky laugh, with people taking selfies with the phallic statues. A sign in the park instructs women to choose a penis statue to hug and, like making a wish, she will be granted with a partner with genitals the same size.

It may seem a bit crazy, but phallic symbols have long been worshipped, even before Buddhism took hold in Thailand. Shrines bearing penises can be seen around Thailand; even the Swissotei Nai Lert Park Hotel in Bangkok previously had a penis garden on display.

And who could forget the string of stories that went viral at the start of rainy season as a village built a giant penis statue in the middle of the road to ask for blessings and a bountiful rainy season to feed their crops. The local tradition worked though, as the next day rainfall began.