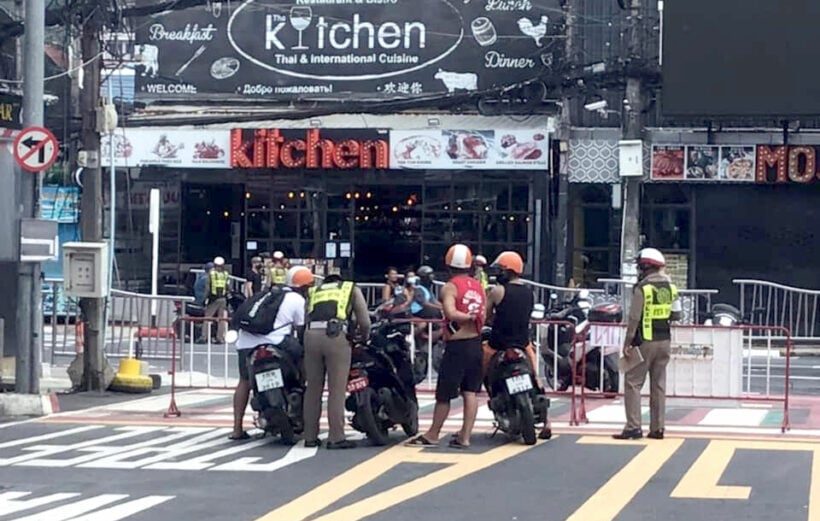 After a Facebook post showing a motorbike checkpoint accused police of destroying tourism, the Phuket Provincial Police fired back. The post was made in Thai in the Phuket Sandbox – SHA Plus Facebook group on Sunday and went viral as it blamed traffic police for robbing foreigners now that tourists are returning.

The post was accompanied by photos of a traffic checkpoint right by the tourist hotspot of Bangla Road, at The Kitchen restaurant next to the TaiPan nightclub on Rath-U-Thit 200 Pi Road. It said that police there were robbing tourists by stopping them and checking that they were following traffic laws.

The Phuket Provincial Police responded to the post by saying that they were just doing their job in enforcing traffic laws. They asked the original poster or others to report any cases where foreigners were being robbed as the post claimed. They said that traffic checks are a normal part of their job with the intention of increasing road safety and reducing traffic accidents.

“Some tourists are not familiar with the roads and do not know the traffic laws, and because of different laws, traditions and cultures, this may cause accidents and harm to the motorists themselves or others and the property of the tourists themselves.”

The police also went further to defend themselves and released statistics of traffic stops to show that they are not biased or targeting foreigners in their checkpoints. In fact, the statistics they released showed that a higher percentage of Thai tourists were stopped and charged with traffic offences as opposed to foreign tourists.

They showed that 0.67% of the 374,117 domestic tourists recorded as entering Phuket from October 16 to November 23 were stopped and cited for traffic offences, a total of 2,507 Thai people. In the same time period, 129 of the 36,549 international travellers who entered Phuket were cited for breaking traffic laws, which is just 0.43%.

The post also cited pre-Covid-19 statistics of 4,785 minor injuries, 117 serious injuries, and 129 deaths in traffic accidents in Phuket in 2019. They urged all people, Thai and foreign, to be safe and follow traffic rules. With the return of tourists in growing numbers though, many are reporting increased police presence and some claim foreign tourists are targeted in areas like Chalong, Cherng Talay, Kamala, and Rawai.