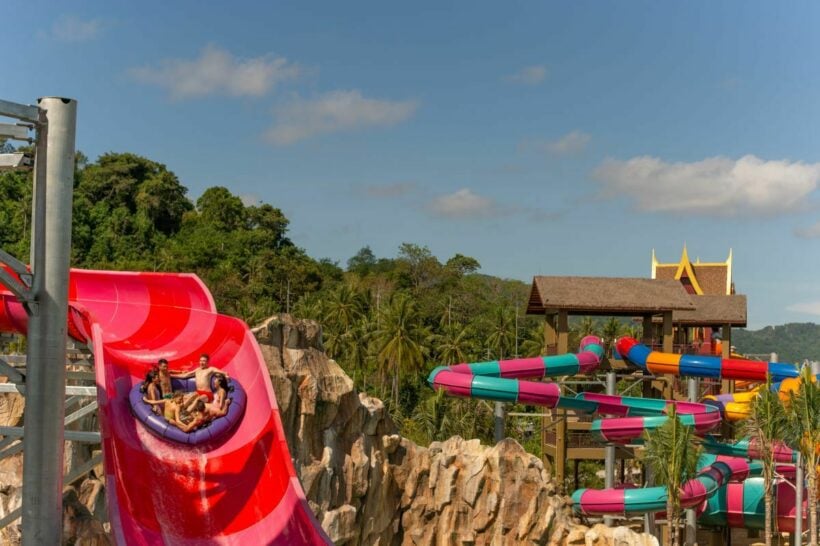 Thailand’s newest integrated resort, the Andamanda Phuket will soft open next week on 21st May 2022. Styled as a leisure and entertainment offering, a water park debut will be the first phase of a larger development by Thailand’s Proud Group with a total investment of THB4.5 billion (USD134 million).

Andamanda will bring a world-class attraction to the resort island featuring 12 slides, 36 activities, and a 10,000 square meter wave pool. Thai culture is a recurring theme with a storyline on the legend of The Lost Kingdom of Nagon. The water park attractions have been designed by WhiteWater West whose credentials include Disney, Six Flags, and Atlantis.

Proud who also have developed the InterContinental Phuket Resort, InterContinental Hua Hua, Holiday Inn Hua Hin, and Vana Nava Water Park has big plans for Phuket. Coming next at Andamanda is a 300-room Holiday Inn resort and lifestyle retail mall. Construction is underway and expected to complete in the next two years.

Located in the fast-developing Kathu area, which is strategically situated between Phuket Town (City) and Patong, easy access to Andamanda will be aided by a significant new infrastructure project. The long-awaited Patong Tunnel made news in January of this year when Thailand’s Cabinet approved a THB14.7 billion budget for both a four-lane tunnel and expressway connection to Kathu. Expected to complete by 2027, Kathu is expected to evolve into the island’s new CBD area with key economic indicators such as Central Festival and Floresta already established as the island’s centrepiece.

Meanwhile, Proud is betting big on two of Thailand’s fast-growing leisure destinations, Phuket and Hua Hin. In the latter, the group has diversified into hotel-branded real estate with the InterContinental Residences. Changes in the pandemic lifestyle changes both Thais and foreigners with urban flight are seeing an influx of new residents to both of these areas.

The Bikini Beach Race to take place in Pattaya this October