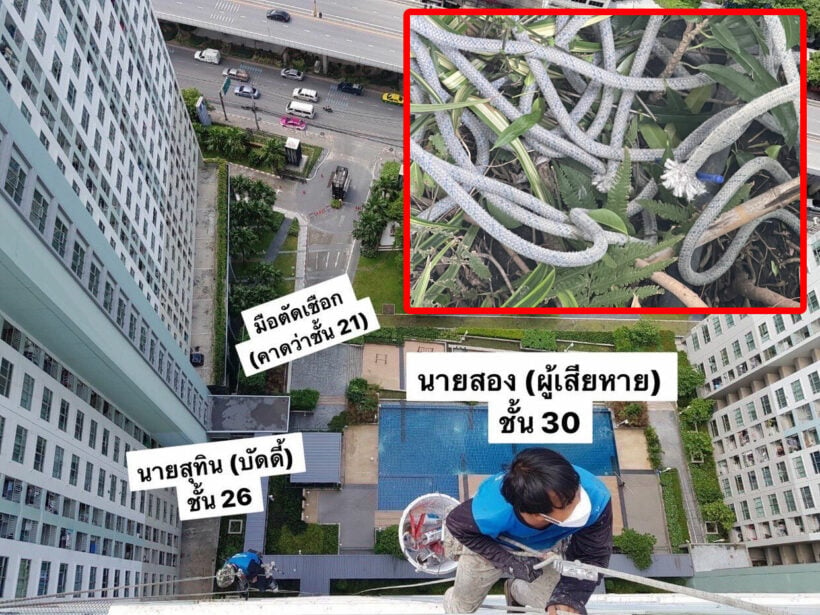 If yesterday’s story about a worker who was rescued from the 26th floor of a condo in Nonthaburi after his safety rope was allegedly cut left you hanging, new information has been revealed. Police investigating the incident say they know who cut the rope that left the painters dangling high above the street on the side of the condo, unable to get down.

The story had gone viral after videos were posted to TikTok by the couple in the 26th-floor apartment that opened their windows and rescued the 2 workers after they were stranded when someone allegedly cut their safety rope.

The administration of the condominium contacted the police to investigate the incident. Police say they know who cut the rope and would be bringing them in today for questioning.

The condo administration say they had issued notice to residents of repair work to be done that day and advised closing windows and removing valuables from balconies to avoid damage. They declined to comment further on the incident.

The worker whose line was cut has been identified as a Burmese man named Song, and he said he saw someone he believed to be on the 21st floor open their window and cut the rope. Without the safety rope, he could not get down without being rescued.

He had descended from the 32nd floor with 2 friends to fix a crack in the building’s exterior. Around the 30th floor, he felt the rope getting heavier and he looked down to see a pair of hands of what he described as a well-dressed woman reaching out and cutting the rope.

He watched in horror as the rope fell away to the ground 26 floors below, where police found it severed amongst some plants later. They have taken the rope as evidence and are doing a forensic investigation on it.

The Burmese worker tried in vain to knock on windows to get attention and be rescued but several apartments were empty. He finally caught the attention of a British man and his Thai partner in their 26th-floor apartment and they helped him in.

MEA says electrical wires seen in Crowe tweet are not theirs