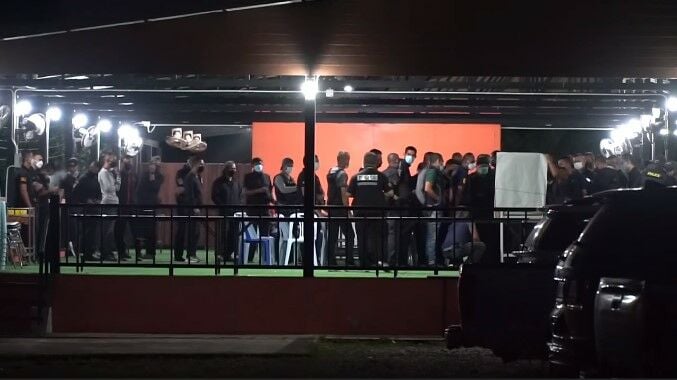 After a gunfire exchange with more than 100 police officers, five drug suspects reportedly fled the scene as one fired an M16 rifle, evading arrest. Apparently, they had been tracked down by police and escaped arrest at least three times prior. Suspects, including alleged gang leader, 41 year old Pradit “Greg” Musikasong, are wanted on several charges.

Dozens of police officers set up a blockade at a resort in the southern province Phatthalung, but the suspects reportedly quickly drove a car out of the property. Officers were able to catch up, but one of the suspects allegedly used an M16 military-grade rifle. Officers fired back and say they believe that one suspect was shot. No officers were injured in the incident.

Officers later searched the room at the resort the suspects were staying at and found guns, bullets, amphetamine, and methamphetamine. Police Forensic Science officers will revisit the place to gather DNA information.

Yesterday afternoon, officers received reports of a car matching the description of the one the suspects used to escape, however it was not the same car. Authorities shared that the group might be attempting to confuse the police.

The CCTV in the area shows the suspects driving in Phatthalung headed toward Nakhon Sri Thammarat. The police are still searching for them and asked hospitals in the area to report if any patients are seeking treatment for a gunshot wound.