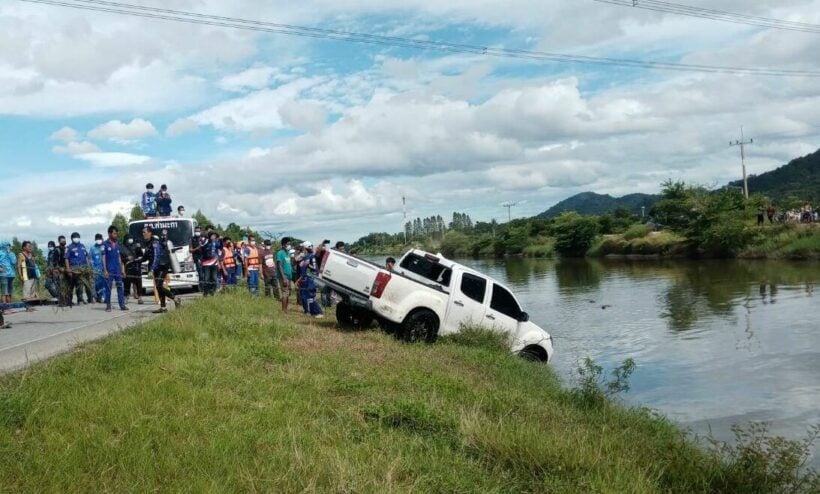 Police have shot and killed a major drug trafficker in the western province of Kanchanaburi, Thai media reported yesterday. The trafficker, a 30 year old man known as ‘Mot Daodam’ had been a major distributor of narcotics in Kanchanaburi, as well as Ratchaburi.

Ratchaburi police found out about Mot Daodam through small-time dealers they had arrested. A team of Ratchaburi officers then travelled to Mot Daodam’s house in Kanchanaburi. Mot Daodam tried to drive away in his truck but officers rolled up to block him from escaping.

Mot Daodam then fired three shots at the officers and rammed his truck into their car. The officers returned fire at Mot Daudam’s truck, causing it to plunge into a canal.

Kanchanaburi police were alerted of the incident and they arrived to find Mot Daodam’s truck in the canal and the car of the Ratchaburi officers with bullet holes in the rear window. Divers later went into the canal and found Mot Daodam dead from a gunshot wound to the head, and about 20,000 meth pills, and guns located in his vehicle.

Meth continues to be the most popular, cheap, and readily available illicit narcotic in Thailand and all of southeast Asia, where the synthetic drugs trade is booming.

Last year alone, more than one billion meth pills were seized in east and southeast Asia, according to a report released by the United Nations. It is considered the “drug of greatest concern” in the region by the UN.

By the end of April, Thai police had arrested more than 120,000 drug suspects in the past six months. They seized more than 2.4 billion baht in assets and confiscated more than 260 million pills of illegal substances, including meth.

UPDATE: Woman who allegedly abused a soldier is a police officer