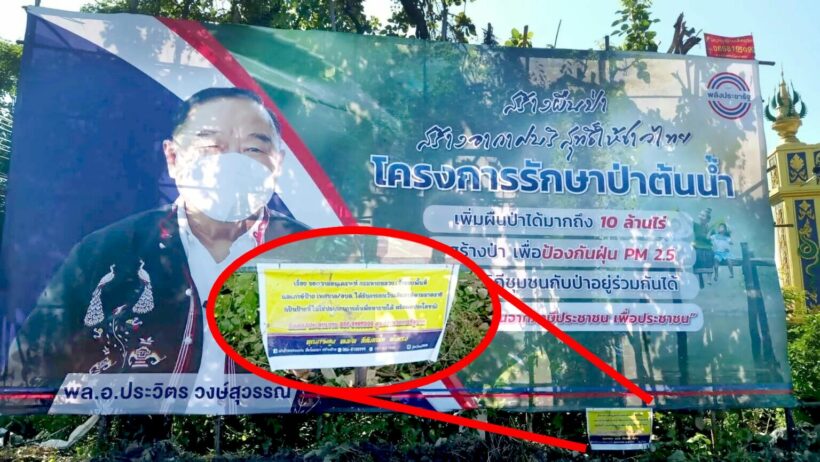 In the Northeastern province of Bueng Kan, billboards have been appearing promoting Caretaker Prime Minister Prawit Wongsuwan. One recently spotted sign in the province’s main city of the same name along the Laos border came with a note attached asking authorities to go easy on them for erecting the billboard, possibly skirting payment and regulations.

The sign features a large image of Prawit wearing a Covid-19 face mask with messages about a conservation project he had previously visited in the province. The billboard talked about watershed forest conservation and bore the logo of the Palang Pracharath Party that Prawit now leads.

The sign seems to be one of many placed around the region touting local projects that the government has aided or campaigns the government promoted. Each features Prawit and the Palang Pracharath Party logo as well as info about the different projects they supported.

But this sign had a smaller notice attached at the base of the billboard that attracted extra attention. It requested special kindness from the highway department in allowing them to use the public land to make a giant billboard promoting Prawit apparently for free. The note also requested a tax exemption for the billboard when normally the Bueng Kan municipality would impose a signboard tax.

A mobile phone number was also included on the note attached to the bottom of the billboard, saying it connected any caller to a government directing centre to handle any questions.

Though, the election campaign season officially begins on September 24, when the current House of Representatives term is in its last 180 days, the signs popping up around the Northeast seem to be early campaigning to win votes for the Palang Pracharath Party and potentially for Prawit himself to be the next prime minister.

Many are cynical of the campaigning though, saying that, coming into election season, the touting of last-minute projects such as distributing welfare cards for up to 20 million poor people are essentially an attempt at buying their vote.

Apple to raise prices throughout globe but not Thailand