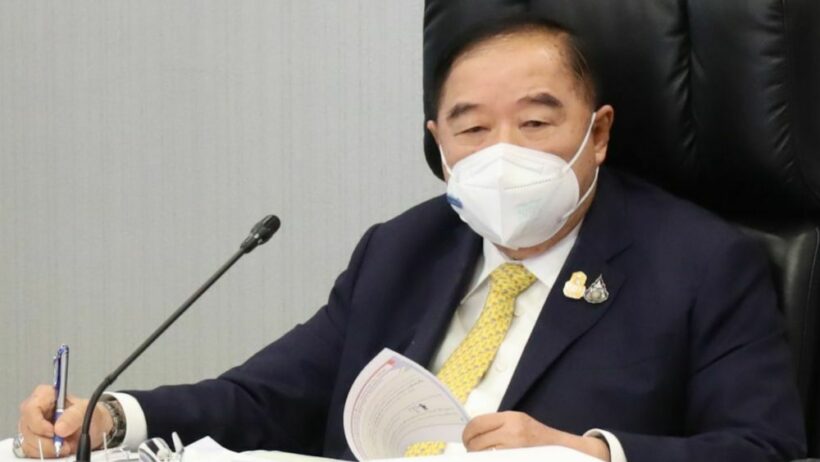 Thailand has done a lot to combat human trafficking and deserves to move up to Tier 2 in the US State Department’s next Trafficking In Persons report, says Deputy Prime Minister Prawit Wongsuwan. Prawit addressed Thailand’s progress in tackling human trafficking in a press conference yesterday.

In the latest annual TIP report, published in June 2021, the US demoted Thailand from Tier 2 to the Tier 2 Watch List…

“Thai authorities have never reported identifying a victim of labor trafficking as a result of fishing vessel inspections conducted at ports. The government’s provision of services to victims remained inadequate, and some victims residing in government shelters lacked freedom of movement. Corruption and official complicity continued to impede anti-trafficking efforts.”

Prawit is sure Thailand will return back to Tier 2 this year. He cited the government’s efforts this year to introduce mechanisms to manage human trafficking legal cases, provide remedy to victims and tackle unfair employment practices.

After the US TIP report 2021 accused Thailand’s authorities of lacking standard procedures in labour trafficking cases, the government issued an operations manual for officials to deal with such cases. Employers in Thailand are now required to draw up labour contracts both in Thai and the language of immigrant workers.

The government has also set up a national centre for separating victims from human traffickers.

Prawit said Thailand has taken on board and implemented all the suggestions made for Thailand in last year’s TIP report.

“All these operations clearly show the Thai government is trying its best to prevent and suppress human trafficking sustainably, so Thailand deserves to be upgraded to Tier 2 this year.”

To read the US State Department’s 2021 TIP report, click here.