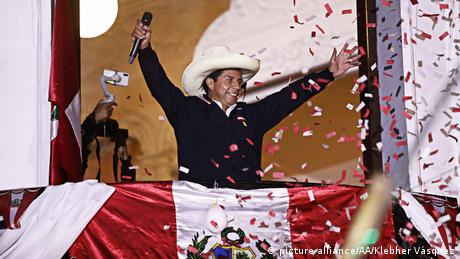 Only one road leads to Puna. The village in Tacabamba District consists of two dozen houses scattered around a few fields and paths — and a school where Jose Pedro Castillo Terrones taught until 2017. From here it takes a whole day to travel to the regional capital, Cajamarca, about 200 kilometers (120 miles) away.

Born in Tacabamba in 1969, Castillo served as a young man in the local Rondas Campesinas — patrols organized by farmers during height of the the internal conflict to protect communities from guerrilla attacks in the 1980s and ’90s, when the armed forces, as well as the Maoist guerrilla group Shining Path and the Marxist-Leninist Tupac Amaru Revolutionary Movement, terrorized rural Peru. The state did little to help, and many believe that the government continues to neglect the rural poor.

In 2002, Castillo failed in his bid to become mayor of Anguia, a district capital in Cajamarca. But in 2017 he rose to prominence as the leader of a nationwide teachers strike, playing a key role in its success. Pedro Pablo Kuczynski, president at the time, eventually met a number of their demands, including higher salaries.

Castillo appears to have won a razor-thin majority in Peru’s June 6 presidential runoff. After a protracted vote count, he claimed victory on Wednesday, although his election rival, the economically liberal authoritarian Keiko Fujimori, whose imprisoned father is a former president himself, has made allegations of fraud and pledged to fight the result.

A threat to democracy?

Castillo’s party, Free Peru, takes a Marxist-Leninist vanguard approach to socialism, which has led some opponents of the new president to say they fear that democracy may now be in jeopardy. But the members of the right wing in Peru are always quick to maintain that their leftist opponents are jeopardizing democracy. There’s even a word for it: “terruqueo” — often groundless accusations that leftists are sympathizing with communism-based terror organizations.

Guillermo Bermejo, a member of Free Peru who was elected to Congress in spring, does have ties to Shining Path, according to the public prosecutor’s office. “We are socialists, and our path to a new Constitution is a first step, and, if we take power, we are not going to leave it,” Bermejo says on recording that he says was made a year ago. “If, in the worst-case scenario, it were to go bad for us, it must go bad under our flag — not under someone else’s.”

In an interview in April, Castillo described Venezuela’s government, which is currently presided over by Nicolas Maduro, as “democratic” because the national legislature includes members of the opposition. In the same interview, he said he would be willing to consider a pardon for Antauro Humala, a former army major serving a 19-year prison sentence for leading an attempted 2005 coup against former President Alejandro Toledo in which four police officers were killed. Humala, whose brother Ollanta was president from 2011 to 2016, led an anti-colonial movement that sought to restore power to Indigenous peoples. Castillo said he would consider a pardon on the grounds that the sentence was too long.

Castillo leads the socially conservative faction of the otherwise-left-wing Free Peru. An evangelical Christian, he has been vocal in his opposition to legalizing abortion and allowing same-sex marriage.

The new president has proposed nationalizing the mining industry, including oil and gas extraction, if contracts with companies are not renegotiated satisfactorily, and overhauling the pension system to favor workers. He aims to ensure that the private sector benefits a majority of Peruvians and plans to boost state spending on agriculture and education.

Castillo has announced plans to “deactivate” the Constitutional Court and create a tribunal to which members are voted in by the public rather than by the legislature. He has also proposed a Constitutional Assembly to rewrite Peru’s constitution “with the color, scent and flavor of the people.”

Just under 50% of voters cast their ballots against Castillo in the second round, and he received 19% support in the first round. Free Peru has 37 of the 130 seats of the unicameral legislature, giving it just under 30% backing from lawmakers. Over half the seats are occupied by Fujimorists, neoliberals and conservatives. “Before he assumes power, Castillo needs to reach some agreements,” the Peruvian political analyst Gonzalo Banda said. “He cannot introduce reforms without the support of Congress.”