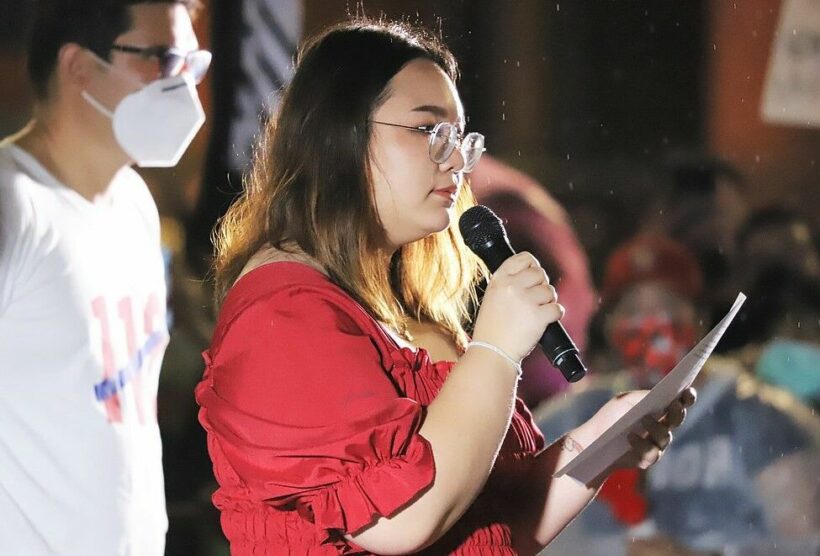 Political activist Panusaya Sithijirawattanakul, aka, “Rung”, has been given temporary release to sit an exam and submit university reports. Thai PBS World reports that the activist was freed from Bangkok’s Central Women’s Correctional Institute at around 8pm last night. She was met by her parents and supporters, having spent 17 days behind bars.

The pro-democracy activist is being tried on lèse majesté charges after attending a political rally in the city of Ayutthaya in central Thailand in August 2020, followed by an appearance at a Bangkok shopping mall last December, in which she wore a crop top. According to the Thai PBS World report, both the Bangkok South Criminal and Ayutthaya Provincial courts have granted bail until January 12, under strict conditions.

While on temporary release, Panusaya is not permitted to take part in any protests that might cause unrest or to participate in activities that could be deemed insulting to the monarchy. She is also not allowed to leave her home, unless it is to attend university, hospital, or court hearings, and must wear an ankle bracelet at all times.

The activist’s release comes after Dr. Boonlert Visetpreecha from Thammasat University petitioned the court for her release. Boonlert explained that Panusaya is a fifth-year student who needs to sit an exam by January 12 and submit a number of reports to university lecturers. The court has designated Boonlert as Pansusaya’s supervisor while she is on bail.

Bangkok is 4th best place to live in Southeast Asia, according to expat survey