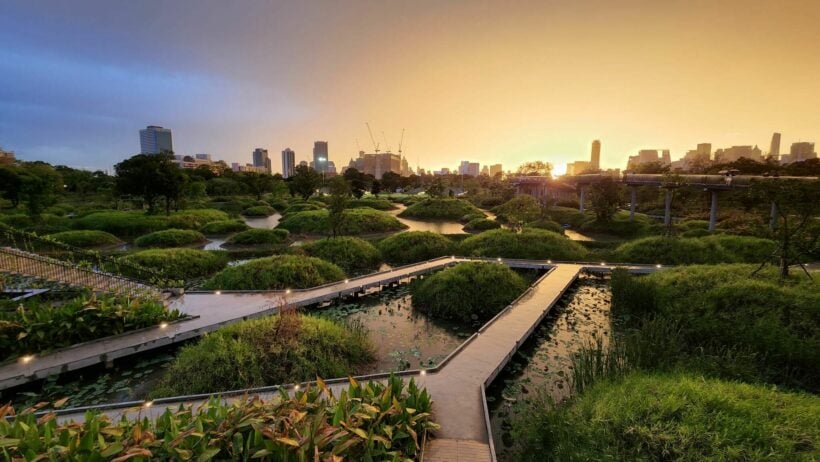 Before Her Majesty, the Queen Mother Sirikit’s birthday on August 12, PM Prayut Chan-o-cha has ordered agencies to speed the progress of Benjakitti Forest Park. The development of Benjakitti Park is part of the government’s efforts to raise the number of public green spaces in Bangkok to a level that is acceptable on a global scale.

“Once the development is completed, the public will reap many benefits [from the park]. It could even be a place to hold major gatherings in the future.”

According to its new design and layout, the 1.6 kilometre connection between Lumphini and Benjaketti will have an elevated park and walkway, dedicated bicycle lanes and visitor rest areas once it has been completed.

The PM promoted the park’s accelerated development at a meeting which was attended by the governor of Bangkok, Chadchart Sittipunt, as well as representatives from the Mass Rapid Transit Authority and Bangkok Mass Transit System.

Improvements to public transportation connectivity, the sidewalk along the road and parking spaces were among topics of discussion at the meeting. Prayut wants parks in the Thai capital to be more accessible by the city’s electric rail network.

Since its partial completion, Benjakitti Forest Park has attracted more than 600,000 visitors. According to entry statistics, the park attracts roughly 3,000 visitors on weekdays and about 6,000 per day on the weekends.