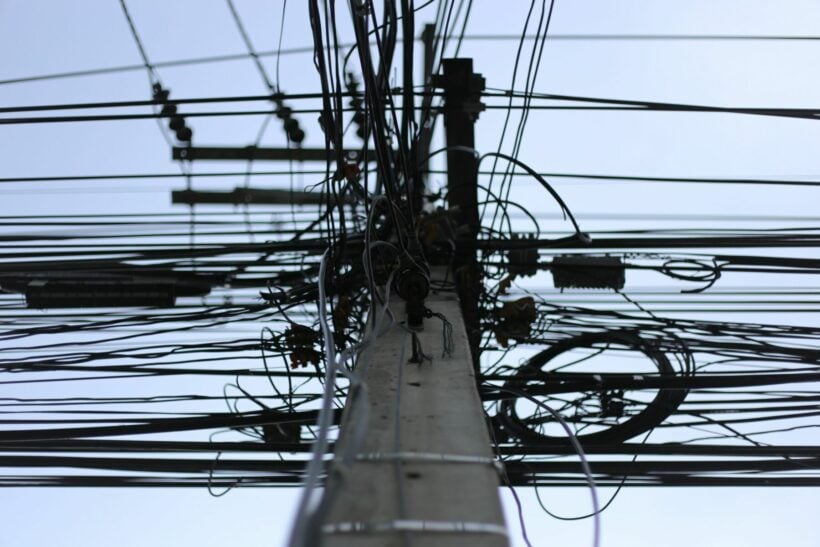 Bangkok officials proposed at a meeting yesterday that telecom service providers should do their part in tidying up overhead cables around the city. The proposal comes a week after a fatal fire was believed to have been caused by a transformer exploding at a 3 storey shophouse. The fire broke out in a historic market in Bangkok’s Chinatown, killing 2 people.

The officials agreed that all overhead cables in Thailand should be properly separated based on their type, before they are moved underground. Types include high voltage, low voltage, and communications cables. NBTC representatives accepted that some of the overhead telecom cables are still needed, but they must be properly bundled. It was proposed during the meeting that the work would be done in phases.

Anupong added that telecommunication service providers must work together on how they will manage the cables and whether they can afford to do the job.

According to the MEA, the plan to bury the power cables in Bangkok is estimated to cost 48 billion baht over 5 years.

After the fire in Chinatown last week, the owners of the shop building that caught fire threatened to sue the MEA. This was for alleged negligence with the transformer that caught fire. Following the incident, Bangkok Governor Chadchart Sittipunt asked the Metropolitan Electricity Authority to investigate the safety of almost 400 power transformers and power lines around Bangkok.

The MEA announced on Sunday, June 24, that it would accept the responsibility.

Ups and downs: Man wins lottery then falls to his death down drain