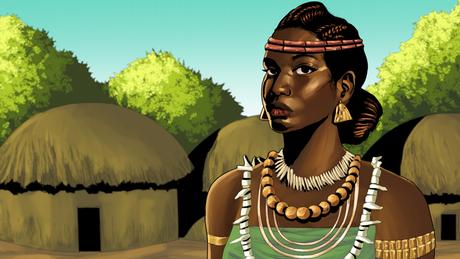 What is Abla Pokou’s position in the Ashanti lineage?

Abla Pokou was born at the beginning of the 18th century. She was the niece of King Osei Tutu — co-founder of the Ashanti Empire in modern-day Ghana. When he died, a succession war broke out, and Dakon, Abla Pokou’s second brother, who was one of the heirs to the throne, was killed. Fearing for her life and family, Abla Pokou fled.

Who accompanied Abla Pokou as she fled?

Abla Pokou left with all the loyal people to Dakon and refused to see Opokou Ware on the throne. She gathered a massive caravan and led the people in the direction of modern-day Ivory Coast.

How did Abla Pokou travel to Ivory Coast?

According to legend, Queen Abla Pokou and her followers could go no further during their escape when they reached the Comoe River. The Comoe is a natural border between present-day Ghana and Ivory Coast.

The river was at its highest level due to constant rains, so it was impassable. Queen Abla Pokou consulted the wise man who accompanied them, and they said the river gods demand sacrifice in the form of a child from the noble bloodline to cross the river. So Abla Pokou threw her child into the river, and he disappeared in the swells.

Still, according to legend, something incredible happened: the trees on the bank bent their trunks to make a bridge. Another version says enormous hippopotamuses appeared and lined up to create a walkway for Abla Pokou and her escort to cross the river.

After the crossing, Abla Pokou wailed to her companions “Bâ wouli,” which means “The child is dead.” This sentence may have coined the name of the Baoule (“ba wouli”) people living in modern-day Ivory Coast.

Did Abla Pokou really sacrifice her child to the river?

“Queen Abla Pokou probably did not sacrifice a child,” says professor Kouame Rene Allou to DW. “There are also moments in the year when the Comoe river is so low you can ford, thanks to rocks that show on the surface.” That’s probably what the Baoule did, according to other sources.

Where exactly did Abla Pokou settle at her arrival in Ivory Coast?

Queen Abla Pokou lived in Namounou in Bwake, not far from the village of Akawa. Namounou means “Look after the mother.”

Unfortunately, the village of Namounou became deserted when the queen died. She was buried in the river N’draba. Akawa Boni, who succeeded her, went to settle in Sakassou.

How is she remembered today?

Queen Abla Pokou is still celebrated in oral and written literature in Ghana and Ivory Coast, but today it’s hard to find representations of Abla Pokou.

There is no monument nor museum in her memory apart from a metal statue on the République square in Abidjan. However, in the fashion industry, some designers have created styles bearing the famous Queen Abla Pokou.

World in Progress: Struggling for survival

World in Progress: How are textile workers in Bangladesh faring during the pandemic?