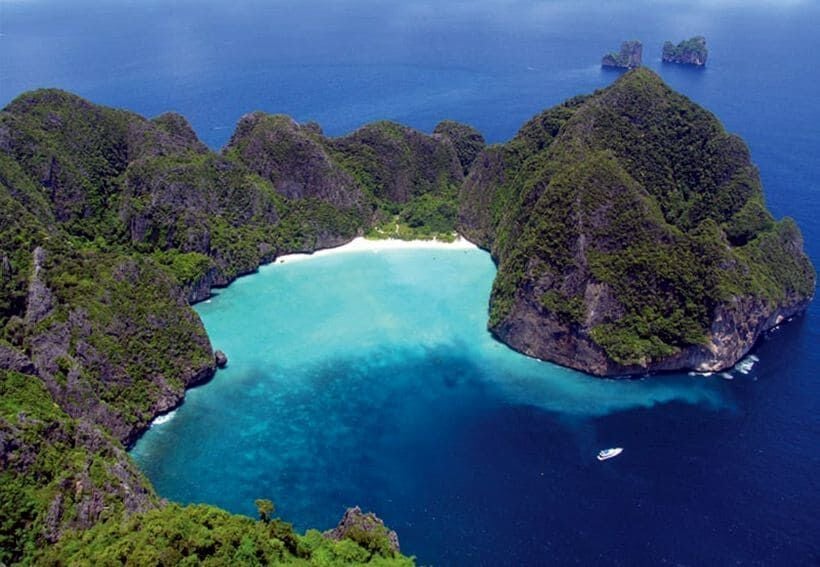 Maya Bay, the tropical island cove of Hollywood acclaim in Krabi province, finally reopened for tourism on January 1, after 3-and-a-half years of closure in a bid to restore its damaged white-sand beach and decimated marine ecosystem.

Officials temporarily closed the bay in June 2018 to clean the beach and restore the area’s coral reefs. Originally planned as a 4 month closure, officials closed the bay indefinitely in October of that year to allow more time for the environment to recuperate from the effects of over-tourism.

Located in the famed Phi Phi Islands of Krabi province, the bay is part of Phi Phi Lei Island in Hat Noppharat Thara-Mu Ko Phi Phi National Park. It was made famous in the 2000 dark romance film,The Beach, starring a young Leonardo DiCaprio. Since then, millions of tourists have flocked to the bay to capture a slice of cinematic paradise.

Prior to its closure, the 250 metre long, 15 metre wide beach was receiving up to 200 boats a day, or about 5,000 tourists, The Guardian reported. Such a high volume of traffic proved unsustainable for the Andaman Sea gemstone with an estimated 80% of its coral reefs damaged by boats, trash and chemicals such as sunscreen.

During its prolonged shutdown, boats were still allowed to anchor outside the bay to allow tourists to take pictures of it. The bay also underwent a rehabilitation program, during which the beach was cleaned, plants and trees were planted, and more than a thousand healthy corals were transplanted to restore the damaged areas.

Officials briefly considered reopening the bay for limited tourism in early 2021 to help boost tourism in the region after a year of pandemic, yet the beach remained closed until January this year.

The bay is now open from 10am to 4pm and visitors can book a boat in one of eight shifts per day, limited to 300 people each, for a maximum of 3,000 daily, according to LonleyPlanet. In an effort toward sustainable tourism, boats are no longer allowed to anchor in the bay, but most now dock at a new floating peer located behind the cliffs, and visitors are allowed to swim only in a designated area. But many tourism pundits are betting that the tourist visits will exceed that during busy times and enforcement may be ‘lax’.

Although the bay has reopened, it’s recovery is still far from complete. Because coral grows at a slow rate of about .5 centimeters a year, it will take many more years for the aquatic ecosystem to fully recover. Visitors are advised to cherish the picturesque bay by practicing Leave No Trace principles, including packing their trash and wearing chemical-free sunscreen.