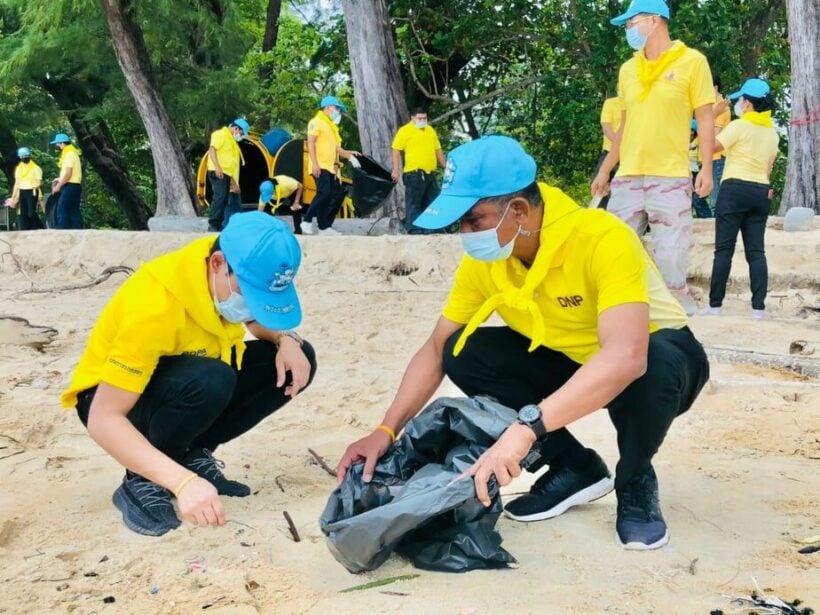 The tar balls are back. During a scheduled beach clean yesterday along Phuket’s north-coast Nai Yang Beach, volunteers noticed the return of the mysterious tar balls that were washing up along the coast in the weeks before Phuket’s Sandbox started on July 1.

Michelle from Sustainable Mai Khao Foundation contacted The Thaiger this morning with the news of the return of the tar balls. She says the only way to remove them is to pick them up with protective gloves, squash them all together in clumps and then dispose them in plastic bags.

“If you step on one of the tar balls it is a very difficult, and messy, procedure to clean them up. At this stage we have no idea where they’ve come from – we’ve heard no reports of oil spills off Phuket’s coast.”

At the time there had been a oil spill in the Andaman Sea during the third week of June this year. But there was never any direct correlation between the oil spill and the squishy, plasticine-like tar balls that were littering the beach.

Over the following week just about all of Phuket’s west coast beaches were showing up with the tar balls.

Last June, a marine biologist explained that the tar balls are formed when oil is dumped into the ocean water, perhaps from an oil spill, but often due to fishing boats or other vessels pumping their engine holds in the open water.

“A thin layer of oil forms on the surface and the lightest elements evaporate over time, while others dissolve into water. The heaviest bits get blown around and eventually break up in the wind and ball up into a hard tar crust and a squishy inside.”

A few years back, Phuket had a similar problem with tar balls washing ashore, and launched a campaign to remind fishing boats that it’s against the law to dump oil. The punishment is up to 60,000 baht and 3 years in jail, plus the cost of ocean cleanup and losses to anyone affected by it. Safe dump tanks are provided at sea ports.

“We invite people to join our cleanup tomorrow ( October 15)in Maikhao at 8.45am. They can check our Facebook page Sustainable Mai Khao for details of the meeting point and what to wear.”

Minister of Tourism is sure tourists will flood Thailand November 1