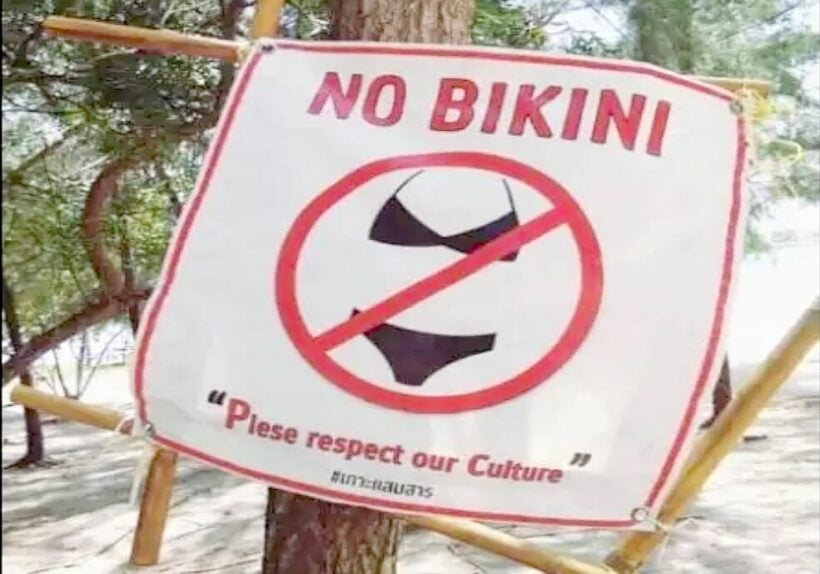 Thailand is known for its beautiful beaches, and Ko Samae San in Chon Buri province is a tropical paradise gem of an island with beautiful marine reserves and beaches to relax on. But the Royal Thai Navy stirred controversy recently when a photo went viral on Facebook of a sign on the beaches of Ko Samae San banning people from wearing bikinis.

A spokesman for the Navy said that the island is dedicated to conservational and eco-tourism, not for traditional beachgoing tourists to frolic freely. The Royal Navy acts as the caretaker for the island, and they are focused on maintaining it as a conservation tourism destination.

So the sign was put up on the beach that says “No Bikini. Please respect our culture.”

Someone snapped a photo of the eyebrow-raising sign and posted it on Facebook where it started gaining attention rapidly. Both foreign and local tourists started asking questions, wondering why they were not allowed to wear a bikini and enjoy the beaches.

By yesterday, the post in the picture had garnered enough attention that a spokesperson for the Navy had to respond. They said that bikinis really go against the more demure Thai culture, and they felt that the island should be more traditional and not cater to more disruptive types of tourism.

The spokesperson pointed out that they don’t allow drinking on the beach or any sort of loud parties or get-togethers, in hopes of further discouraging rowdy tourists in order to keep Ko Samae San as a peaceful natural reserve and not allow it to become a party beach destination.

In the end though, the Navy backed down and said that there was no official ban on bikinis on the beaches of the island, and that the signs were placed merely as a suggestion, encouraging people to be more modest and respectful of Thai culture and perhaps consider wearing different attire to go swimming on the beach.

The Navy is now undertaking replacement of all the signs to include wording that doesn’t appear to ban bikinis, but rather encourages people to where more conservative beachwear.

What do Thai people think about ‘The Big C’ in Thailand | Ask The Thais (Pt. 1)