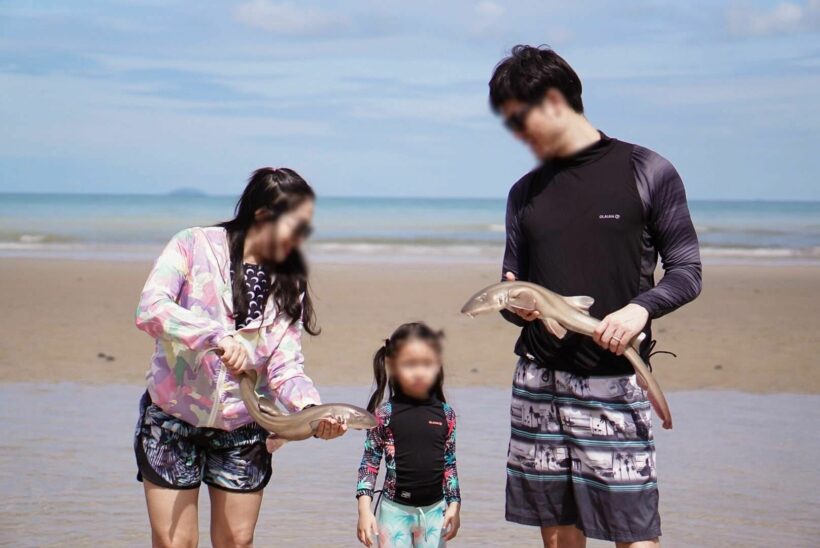 Thai netizens heavily criticised RTN’s activity day, which charged people money to take part, saying it did not improve the environment or create environmental awareness, but it destroyed the ecosystem.

The RTN and the Royal Thai Marine Corps came under fire after their conservation activity day appeared on a family’s Facebook page, named ชอบไปหมด, which means ‘we like to go everywhere.’ The family posted pictures and stories of the RTN activity at Haad Tawan Ron in the Sattahip district of Chon Buri province.

The post included pictures of the family of three holding a shark and later releasing it into the water on the beach. Other pictures featured sea creatures that the RTN offered to people to hold or touch, including various species of sharks, sea shells, and clownfish.

A number of netizens commented on the post, saying that the shark would be tired from being held in the air for pictures. Others said the shark wouldn’t survive because releasing a shark is more complicated than just letting it go from the beach. Some observant netizens said the clownfish featured in the pictures weren’t native to Thailand and couldn’t live in the Thai sea.

One woman in Sattahip said it was very expensive to release a shark into the sea which sparked fury among a number of netizens who said that the RTN was only interested in making some money, not saving the environment.

The backlash on social media forced the family into editing the post and apologising for their actions. They insisted that they didn’t realise what they were doing was wrong and only followed the instructions of RTN staff. They believed they were joining a good cause activity because it was being promoted by the state.

The media reported that the activity day had been around since 2016 and was attended by a cross section of society, from families to Thai businesses to influencers, and travel bloggers.

Royal Thai Navy spokesperson, Pokklong Montartpalin, acknowledged that the activity was wrong and inappropriate because some of the sea creatures were not native species to the kingdom. The activity damaged the balance in the ecosystem, and the officers were fully responsible for these wrong actions.

The Commander of the Royal Thai Marine Corps, Ronnarong Sittnan, revealed he banned the activity in 2019. He said it was a reckless act by the Marine Corps Department and would like to apologise for the activity.