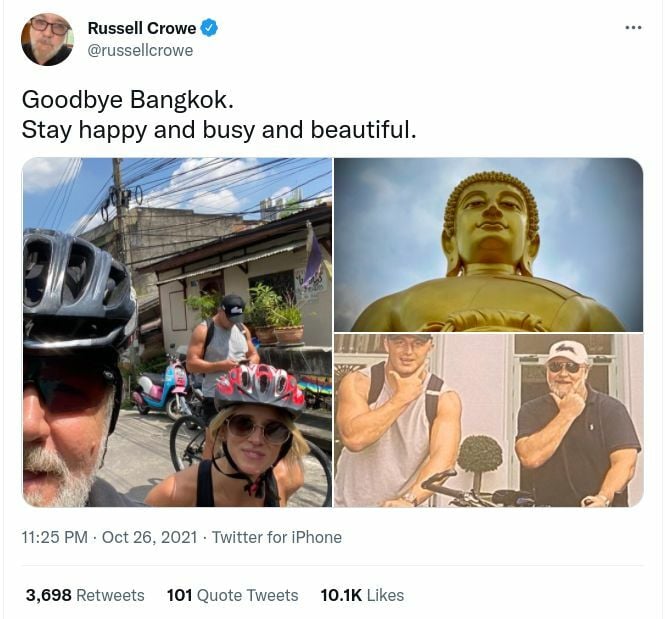 Hollywood movie star Russell Crowe has been causing a sensation among Thai social media, first visiting and praising the Phuket Sandbox, and later travelling around Bangkok. Now his much-celebrated trip is coming to an end as he posts a goodbye message to Bangkok on Twitter.

Crowe first got attention as he arrived in Phuket on September 18 to do his Sandbox arrival quarantine period on the island, and posted positive tweets supporting Thailand’s reopening scheme. The praise won the support of Thai fans, but also government figures, with PM Prayut Chan-o-cha commenting to thank him for his visit and kind words.

Later a meeting was called at the Mandarin Oriental Hotel in Bangkok with Culture Minister Ittipol Khunpluem and Australian Ambassador to Thailand Allan McKinnon where Russell Crowe was given flowers and gifts. He thanked them and praised Thailand for its natural beauty and delicious food.

He made a comment about a lack of English signs at tourist locations that he later took to Twitter to clarify.

“A slight correction. I asked for signs in English in places that weren’t the obvious or customary tourist spots. I also should have mentioned the historical plaques in English, I’m interested in things like that. What bridges celebrate, who’s the statue?”

Crowe also got attention for posting a pic he tagged “Bangkok Dreaming” that showed Thailand’s ubiquitous cables filling the sky, which prompted Thai people to comment on the countries poorly maintained wiring, and the Metropolitan Electric Authority to clap back and explain that the wires pictured were not theirs.

Now it seems his time in Thailand is over, having come to the country to film a Vietnam War movie called “The Greatest Beer Run Ever”. In his latest tweet, accompanied by photos of a bike ride Crowe took through the Phasi Charoen district of Bangkok, he posted his farewell.