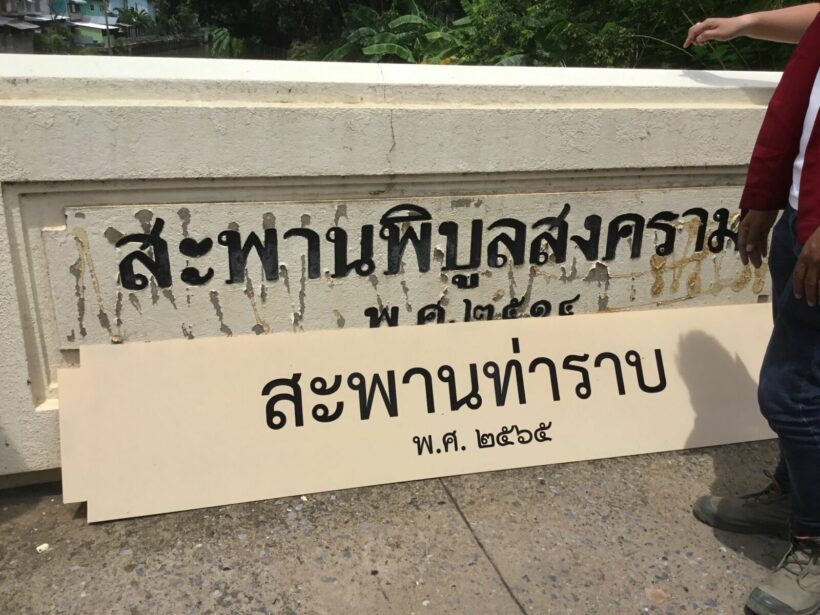 An investigation has been launched into the mysterious overnight name change of a symbolic bridge in Bangkok.

Sunsern Rueangrit, Dusit Thani district of Bangkok assistant director, posted the news via his Twitter account after a Bangkokian asked why there had been no official announcement of the name change.

Bangkok Governor Chadchart Sittipunt was another perplexed by the name change. The 56 year old revealed that city officials received the news via the Traffy Fondue platform, a channel where Bangkokians can report problems.

Bangpho Police Station immediately launched an investigation into the mystery. They studied CCTV footage on Saturday night which revealed 2 skinheads, wearing Thai soldier facemasks, climbed out of a red pickup and attached 4 new signs over the old ones. The pair spent around 17 minutes attaching the new name signs with superglue before returning to the pickup and making a getaway down Sawankhalok Road.

Plaek is the longest-serving PM in Thai history with 15 years of office. Plaek was also a member of the People’s Party or Khana Ratsadon, which led the Siamese revolution, or Siamese coup d’état in 1932 when Thailand changed from an absolute monarchy to a constitutional monarchy.

Plaek promoted Thai nationalism and launched the Thai Cultural Revolution, which had various cultural mandates in the past like banning people from chewing betel leaves and forcing people to wear Western-style costumes, using spoons and forks, etc. He also changed the name of the country from Siam to Thailand.

Some Thai netizens saw this action as an attempt to take away the spirit of the revolution and Plaek Phibunsongkhram.

One Thai man, Kaweewut Sukprasert, revealed on Facebook that Din Tharap (or Phraya Si Sitthisongkhram) was a leading soldier and member of the Boworadet Rebellion that was suppressed during Plaek’s rule.

Din Tharap was a former military classmate of Plaek but he was a royalist and received several royal titles. On October 11, 1933, he joined Prince Boworadet in a rebellion to restore power to King Rama VII, who had surrendered it the previous year to the People’s Party after its successful coup.

Din Tharap was eventually shot and killed by Lieutenant Praphas Charusathien, who 40 years later would become one of the “three tyrants” deposed in the October 1973 uprising.

OIC commends treatment of Muslims and quality of life in Thailand