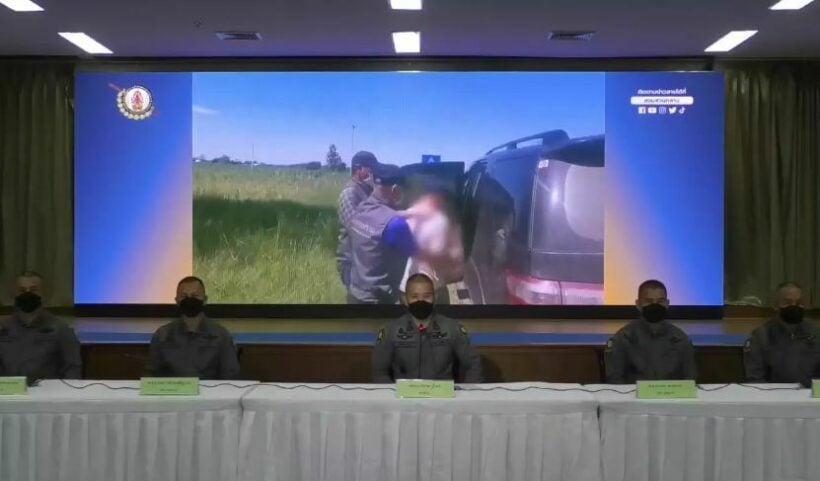 Police arrested a second man on suspicion of jointly murdering a Thai couple – the woman pregnant with twins – earlier this month in Taiwan. “Thanawat” admitted beating the couple to death with an iron rod together with Santi, the original prime suspect, and another Thai national.

On Friday, Santi handed himself into the police in Chiang Dao, northern Thailand. Police interrogated Santi all day Friday and Saturday. During interrogation, 35 year old Santi admitted he was the mastermind behind the murders but denied murdering the couple himself. He said that 2 other Thai men acted as assassins. Following the interrogation, the Criminal Court issued arrest warrants for the 2 alleged assassins, Thanawat Pookhemthong and Samart Sae Lee yesterday morning.

Thanawat admitted that he, Santi and Samart used iron rods to beat the couple to death before stuffing their bodies into a BMW and leaving it at a train station. Thanawat said he fled back to Thailand and travelled to Kalasin province to hide.

Thailand’s Central Investigation Bureau said that Santi and 2 accomplices killed 35 year old Potjanee Norat – pregnant with twins – and her husband Prasert Norat over a drug conflict. Despite thorough interrogation, Santi refused to speak about the details of the conflict. Police said they are “not convinced” of his motives.

The 3 suspects allegedly returned to Thailand on June 11, the day before the bodies of the Thai couple were discovered inside a BMW car outside a high-speed rail station in Taoyuan near Taipei the next day on June 12.

Santi fled Thailand before police could catch him but later made contact with Thai police to say he “felt guilty” and wanted to turn himself in. Santi remains in police custody.

The suspects will be prosecuted according to the law.