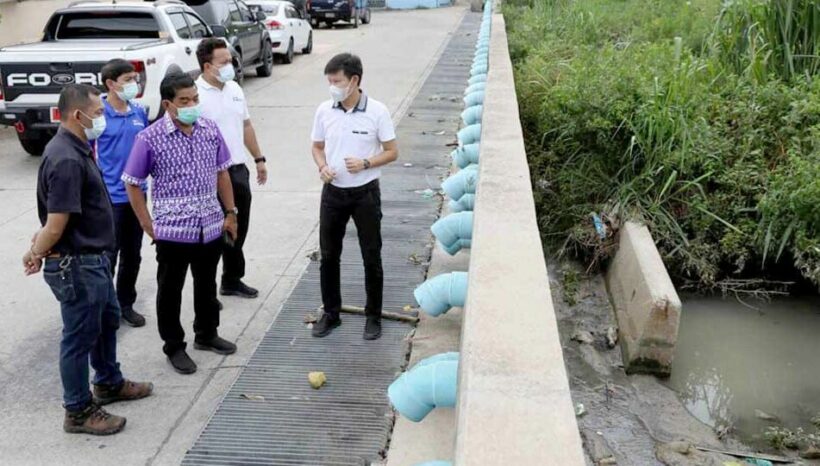 A village in East Pattaya has had horrendous sewage problems for more than 7 years, and things aren’t getting any better. Wastewater regularly flows into Daraphan Village 5 from the neighbouring Eakmongkol Village 8, and officials’ minimal efforts have not brought about change.

In 2015, officials had agreed to install proper pipes to carry the wastewater into Pattaya city sewers. But after Pattaya’s deputy mayor and city councillors visited both villages this week, they found that the pipes were useless. Sewage still flowed down the road into Daraphan 5.

So far, Deputy Mayor Manote Nongyai hasn’t made any promises to the desperate Daraphan villagers on fixing the sewage problem that has plagued them for at least 7 years.

Several areas of Pattaya battle with sewage problems. Officials have come up with various “solutions” to the problems that can be described as jokes at best. In 2019, officials jammed sandbags into a sewage outlet to stop black sewage and untreated wastewater gushing into Jomtien Beach’s coastline.

The authorities admitted there was much to be done to find a permanent solution to the problem. Damning videos and photos were posted all over social media. The waters off Jomtien were a black sea of sludge.

One Pattaya mayoral candidate vowed to solve the city’s flooding and waste problems during his campaign this year. However, he did not win the city’s election.

With empty promises from officials, hope remains dim for the people of Daraphan.