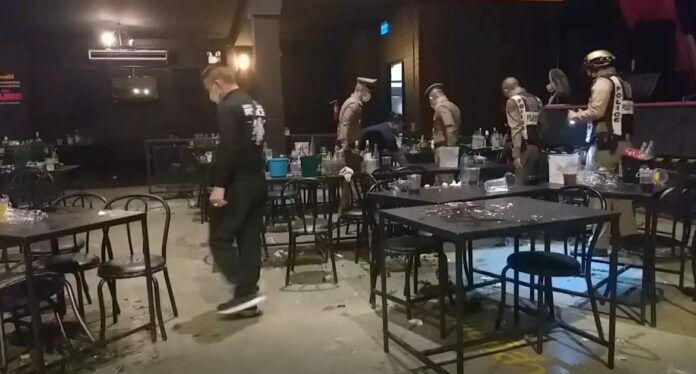 A comedy show has turned into a not-so-funny night.

There’s been a shooting after a comedy show at a bar in central Thailand. One customer was shot, and rushed to a local hospital seriously injured. The shooting happened in the early hours of Thursday morning in the main city district of Ratchaburi province.

The bar had hosted two famous Thai comedians, Ball Choenyim and Bobby 3.50. Once the show was over, there was reportedly a brawl between several groups of customers. Witnesses reported hearing three gunshots, and customers uninvolved in the fight ran away terrified.

Police rushed to the scene to find a large pool of blood, along with broken bottles on the floor. Local media reports that the bar had been investigated in the past for allowing a customer to carry a firearm, and was ordered a temporary closure. But the bar had reportedly violated the order by continuing to operate.

Police brought the bar’s owner to the district’s station for questioning, along with customers who remained at the scene. The police planned to find the alleged shooter and others involved in the fight.

This news comes after two other shootings at night venues in Thailand have ended fatally this month. In Phuket, a security guard shot and killed a Thai customer who was wielding a half-metre-long sword at SOD nightclub on August 1. A month-long closure was been ordered for the club.

Meanwhile, a Thai paramilitary ranger faces prison after killing two people and injuring one in a bar fight in the southern province of Yala on August 12. The 25 year old ranger, Hadchaicharn (surname withheld), shot and killed one man, stabbed a woman to death, and shot and injured another man in Nasa bar on Chalermchai Road in tambon Sateng.

‘Dead body’ on Thailand beach turns out to be sex doll

UPDATE: Woman who allegedly abused a soldier is a police officer