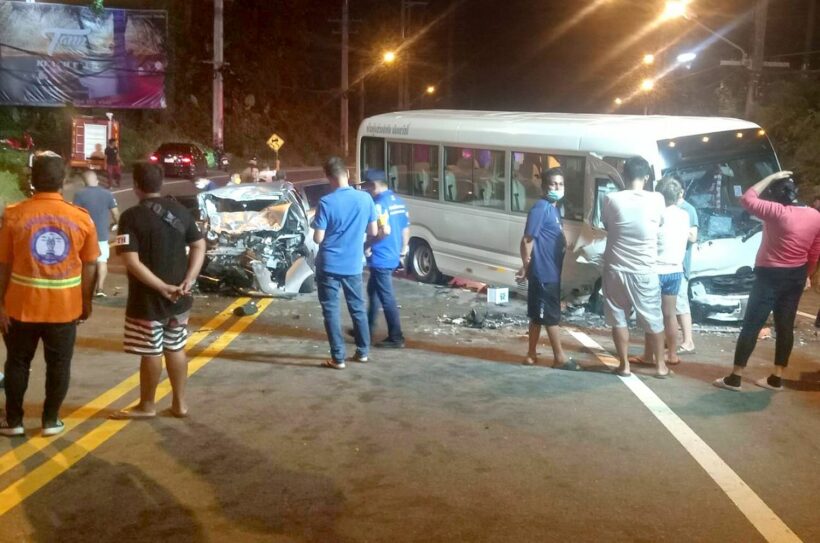 On a winding mountain road, a car of Singaporean tourists crashed into a small tour bus, killing the driver of the car and injuring 7 people in total. The crash happened in the Muang district of Phuket last night when the driver of the car lost control coming downhill and ploughed into the bus.

The car, a Toyota Yaris registered in Phuket, contained 5 Singaporean tourists, two of them 21 years old, two of them 30 years old, and one 66 year olds. The driver was a 21 year old woman. The car was travelling over the hills on its way to Karon from the neighbouring tambon of Chalong. It was coming down a hill when the 21 year old driver lost control and smashed into a white mini tour bus.

The bus was also registered in Phuket and was just on its way back from hosting a group of tourists on an excursion to Kata Beach. When the two cars collided, the windshield was smashed on the small tour bus and the Yaris was badly damaged. All the passengers in the car were injured while, on the bus, the 32 year old Thai driver, along with a 43 year old Thai tour guide and a 41 year old tour guide from South Korea, were hurt.

Karon Police were alerted of the car and bus crash just before 11pm last night and raced to the scene, bringing rescue workers and disaster prevention and mitigation officers along. An investigator from the Phuket Tourist Police released full details of those who were injured or died.

All 8 of the injured people from both vehicles were transported to both Vachira Phuket Hospital and Chalong Hospital for treatment. On the way, though, the young Singaporean driver who was unconscious when medics arrived, died as a result of her injuries.

A full investigation is ongoing while police try to put together a full picture of the circumstances and events that lead up to the fatal crash between the Singaporean tourist car and mini tour bus.