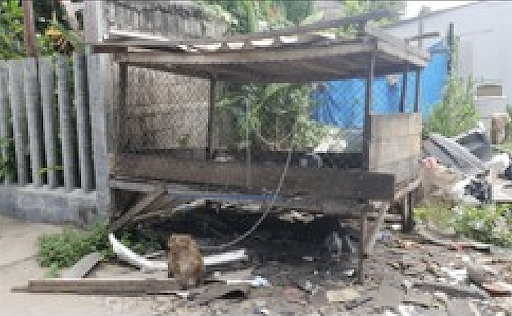 Sandy the macaque, a former working monkey, has been given a fresh start in life after a heartbreaking two years of being chained up to a cage in Rawai subdistrict, Phuket. Before the Covid-19 pandemic, Sandy worked in an elephant camp. The camp closed down over two years ago, and Sandy was chained up ever since, until today.

Two expats, Penny and Barbara, live down the street from where Sandy was kept and were concerned about her wellbeing. The women contacted the authorities who said they couldn’t help, because Sandy was listed as a working monkey.

Sandy’s owner told the women he was willing to give up the monkey, because he would soon move out of his property and couldn’t take Sandy with him. If no one could take Sandy on, he would have to release her into the jungle, he said. Given Sandy’s history, Penny and Barbara doubted Sandy would survive in the jungle. The owner said he was leaving in just one week, so Penny and Barbara contacted everyone they could think of to find Sandy a new home in such a short time.

Today, Sandy was taken in by Thailand’s Department of National Parks, Wildlife and Plant Conservation’s office in Phang Nga province, with the help of Phuket’s Soi Dog Foundation. The DNP will care for Sandy going forward and give her a much happier and healthier life.

“Good news. The DNP in Phang Nga has taken Sandy and will look after her. I wanted to give a huge thank you to the Soi Dog Foundation who helped me in setting all of this up. Without their help it wouldn’t have happened so quickly and easily… Her chain and metal collar have been removed and she will be in a much better place. I will miss her but my heart is so happy that she will thrive now and not wither.”

The WHO insist monkeypox is not “a gay disease’