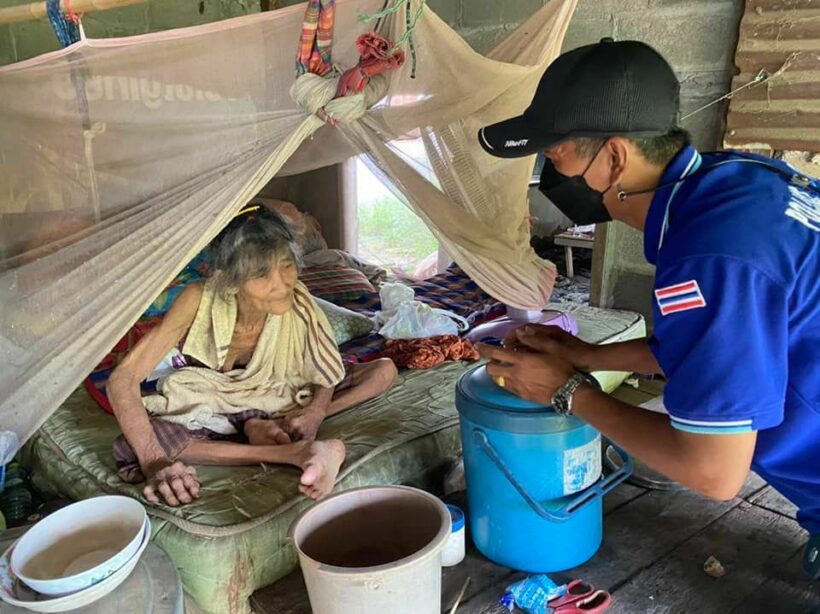 A Thai man who tried to starve his mother to death in the hope of getting her inheritance was found dead yesterday in the family home in Isaan of Buriram province. It is believed he died of Tuberculosis.

Officers from Satuek Police Station and a Wang Krut Rescue team were called to investigate a one-story house in the Nikom sub-district, Satuek district, yesterday after being notified of the man’s death by a family neighbour.

The officers found the rotten corpse of 57-year-old Thongdee Salangam on a wooden bed inside the house being eaten by worms. Officers found the revolting smell of the body overwhelming and believe that Thongdee had been dead for more than four days.

The old woman said she didn’t realize that her son was dead. Nuan told the officers she was starving and hadn’t eaten or drunk anything for 3–4 days.

Nuan revealed she had been bedridden for 10 years ago. She had access to state subsidies for the elderly and disabled but her son stole the money, spent it on booze, and let her starve.

The old woman added that she felt that Thongdee wanted her to starve to death so could sell the house, land, and all of its assets.

“Thongdee ate food in front of me. I begged him for food, but he didn’t give me anything. I had to drink tap water. He always beat me every time he was drunk. I don’t know how I survived until now. I don’t have anyone. No electricity here, and no one will take care of me.”

A 59 year old female neighbour, Danita Trate-theaway, informed the media that she knew that the man attacked and starved Nuan and had reported the incidents to the police.

Police did investigate but said they didn’t find anything to report.

Danita said the old woman still loved her child but no one wanted to visit her because they were scared of her drunk son and worried about being infected with tuberculosis.

Another neighbour, 60 year old Kae Paeree, said Thongdee mortgaged the land 10 years ago and spent all the money, about 50,000 to 60,000 baht, on gambling. The interest raised the debt to 300,000 baht. The debtor was waiting for the grandma to die to seize the land.

The Chief of Satuek District, Piphat Bamrungklang, told media that Satuek Hospital is taking care of Nuan until her health recovers.

He added officers are trying to track down other family members of the old woman. If they can’t find anyone then she would be sent to an elderly care home.