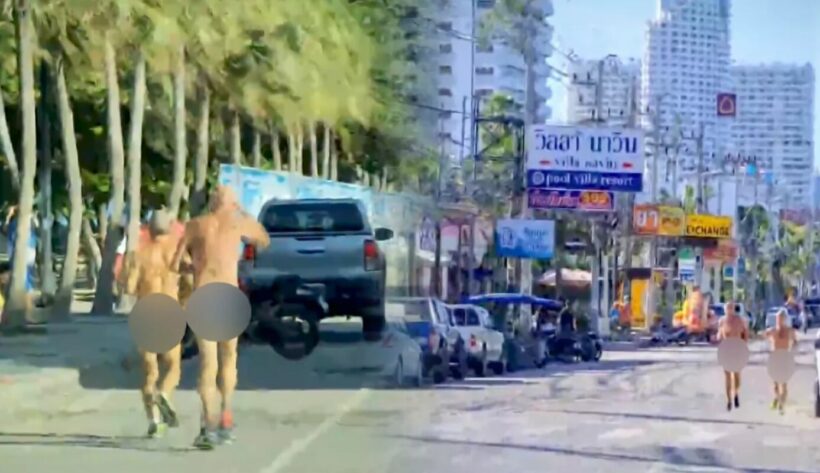 Scantily clad women are a fairly common sight in Pattaya, in clubs by night and on the beach by day. But when the gender roles were reversed, people on social media were going nuts over two middle-aged men jogging up Jomtien Beach Road, wearing nothing more than tight Speedo bathing suits as they ran.

Photos were posted on social media and went viral by Sunday that captured two foreign men, estimated to be between 50 and 60 years old, trotting down the street clad only in trainers and blue Speedo bathing suits. But what seemed like a silly local sight in the tourist mecca that draws foreigners, and often older men, from around the world, was not as well received online.

Many found the images and the running act offensive and an insult to Thai culture, calling the exposed exercise obscene and indecent, and pointed out the unequal treatment of foreign tourists versus local Thai people. The Thai Penal Code states in Article 388 that a maximum of 5,000 baht can be levied against anyone doing shameful acts in public by committing indecent exposure or any other act of obscenity.

People online railed against police and local officials who they say are too lax on foreigners, allowing them to flaunt their bodies and the Thai decency laws. A local pointed out that if a Thai person was spotted running around in a Speedo they would be prosecuted for public indecency.

Jontiem Beach is a popular tourist destination, just south of Pattaya City, an area not common to see tourists or expats strolling between the white sand beach and the condos and hotels lining the main strip. But this scantily-clad Speedo fun run was still an unusual sight that drew a strong reaction, though not the first time people ran naked around Pattaya, and probably not the last.

Thailand No.1 in the world for a wellness retreat