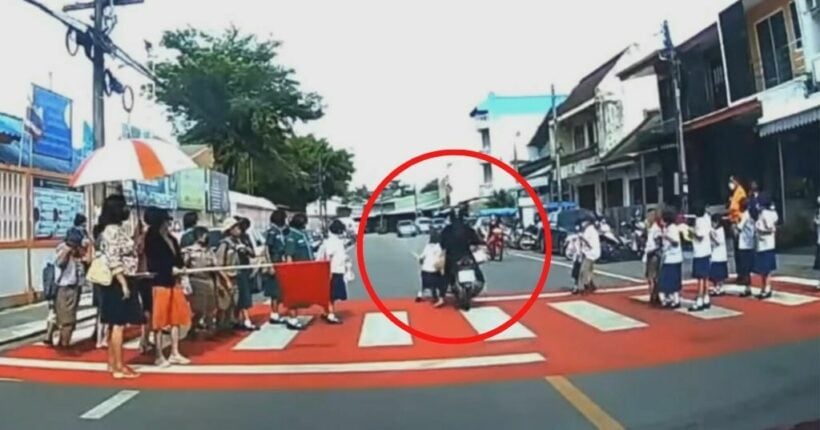 A female student has been hit by a motorbike while crossing the road at a zebra crossing with a group of friends and teachers in front of a school in the southern province of Trang. The motorbike rider stopped only a minute to check that the young girl was OK then immediately drove away.

The dashcam video of the student being hit by a motorbike has gone viral on Thai social media. The footage shows that many students were waiting to cross the road. When a teacher put up a red flag to stop cars, the group of students started walking. A 9 year old female student began to run as all the cars stopped, but she suddenly got hit, but not too badly, by a motorbike and fell to the ground. She only ended up with minor injuries and was able to get up and walk back to the side of the road. The incident was reported to have happened yesterday at 4 pm in front of Tessaban 1 (Sangwit) school.

As featured in the video, the motorbike rider stopped for a short time and then drove away when seeing that the student was OK. Her 39 year old mother took the girl to a hospital for a check-up and filed a complaint to the police about the motorcyclist going through the crossing after all other traffic had stopped and a crossing attendant had raised a red flag. The mother said her daughter still had some pain in her arm and had a nightmare about the incident last night.

Today, a 28 year old female motorbike rider, Supawadee, visited Mueng Trang Police Station to acknowledge charges related to the incident. She faces charges of reckless driving causing injuries to others and a fine of 500 baht.

The woman told police she was rushing to work and didn’t notice the red flag. She stopped to check the girl’s condition and left when seeing that the girl was OK. She knew it was wrong and imagined that it could go viral on social media. She said she visited the police station today to say sorry to the girl and her mother, and she was willing to take responsibility for the incident.

The girl’s mother has told Thai media that she wasn’t angry with rider but expected her to pay for treatment and compensation. She said other drivers should note this incident as an example, and be more careful when driving, especially near a school.

Thais have had a recent spate of zebra crossing incidents after a policeman drove through a crossing in Ratchathewi in Bangkok in February, killing a female doctor. There has been a noticeable improvement of general behaviour at zebra crossing although some cars and motorbikes still fail to stop. Many of the inner city zebra crossings are also now being attended by police at peak crossing hours.