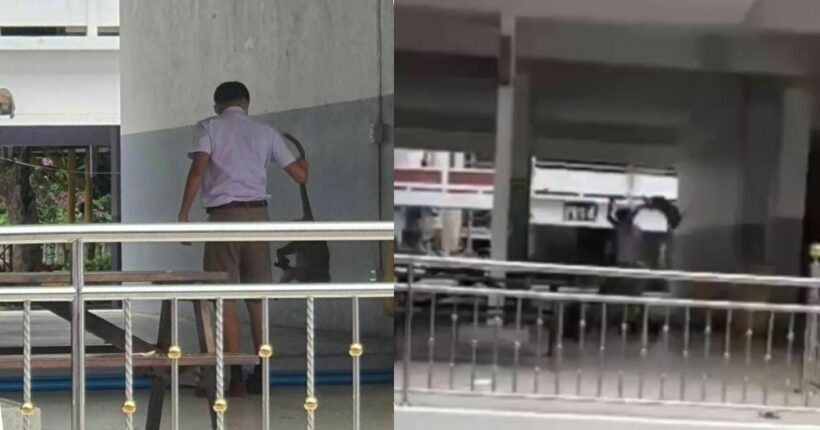 A monkey bit a 15 year old student at a school in the central province of Phetchaburi, so he picked it up by the tail and slammed it to the ground. It might not seem nice, but it was an act of self-defence.

In the video, numerous monkeys can be seen freely roaming around Prommanusorn School in Mueang district. Perhaps the students enjoy the monkey’s company, but the animals can be dangerous and carry diseases, like Nousai malaria, rabies, or… monkeypox. So, its understandable that he fought back.

Thai media reported that the student suffered injuries on his right arm from the monkey attack and was admitted to hospital where he spent the night.

Apparently, this isn’t the first time the monkeys have caused havoc at the school. Some students said the monkeys had stolen their snacks, and others said they were constantly annoyed by monkeys getting in their way.

Advisor to the Ministry of Natural Resource and Environment Yuttapon Anginan visited the victim to find out more. Yuttapon said the monkey bit him due to its natural defensive instinct.

Officers from the ministry said they plan on introducing more monkeys, of a different species, near the school grounds. They think it will help to keep the original monkey species at bay, somehow. The ministry will also work on neutering the monkey population to prevent them from breeding further and collect blood samples from the monkeys to test them for diseases.

Officials from the ministry said they would send a specialist to the school to give teachers and students advice on how to leave peacefully with the monkeys.