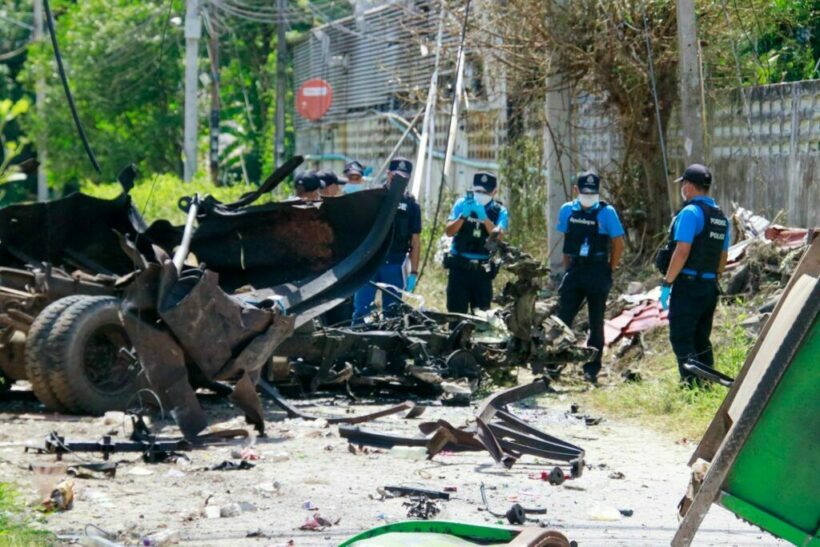 In a suspected insurgency attack in Thailand’s “Deep South”, men armed with guns hijacked a garbage truck, tied up 4 binmen on the roadside and placed a 50kg explosive inside the vehicle. The suspected insurgents drove to a police checkpoint where they detonated the bomb, blowing up the garbage truck and injuring one police officer. The incident happened yesterday evening along the Pattani – Narathiwat road in Pattani province in southern Thailand.

At around 8pm last night, 4 binmen were driving to a landfill site – around 3km away from the police checkpoint – when a group of suspected insurgents armed with guns opened the driver’s door. They pulled him and 3 other binmen out of the vehicle and tied them up with rope to trees on the side of the road. Some of the armed men kept watch on the binmen while 2 more suspected insurgents hijacked the garbage truck, placed a 50kg improvised explosive device inside it and drove it to a PPT petrol station in front of a police checkpoint on the main road.

The insurgents detonated the bomb and fled the scene. Moments later a loud shudder was heard. One police officer, Lt. Col. Nattakit Chiewchan, was hit by shrapnel in several places and was taken to Pattani Hospital for treatment. The explosion damaged the police booth, a two story commercial building home to various public service offices, the PPT petrol station and some residences.

Police from Panare Police Station were notified at around 9:30pm that a car bomb exploded at a police checkpoint. Police found wreckage of a 6 wheel garbage truck and vehicle parts scattered everywhere, but a power cut which happened immediately after the explosion prevented police from collecting much evidence last night. Police sent warnings to all other police checkpoints to keep an eye out for suspicious vehicles, but no other attacks were reported yesterday. Police resumed their investigation this morning.

No insurgency groups have yet claimed responsibility for the incident, but one of southern Thailand’s insurgent groups – such as the BRN or PULO – is suspected to behind the incident, which was aimed at police officers and public service staff. Insurgents in the 3 southern border provinces have taken out sporadic violent attacks on representatives of the Thai state – such as police, government officials, Buddhist monks or teachers – in their drawn out fight for either complete independence of the historical Patani kingdom or simply better living standards from the Thai government, depending on the insurgency group.