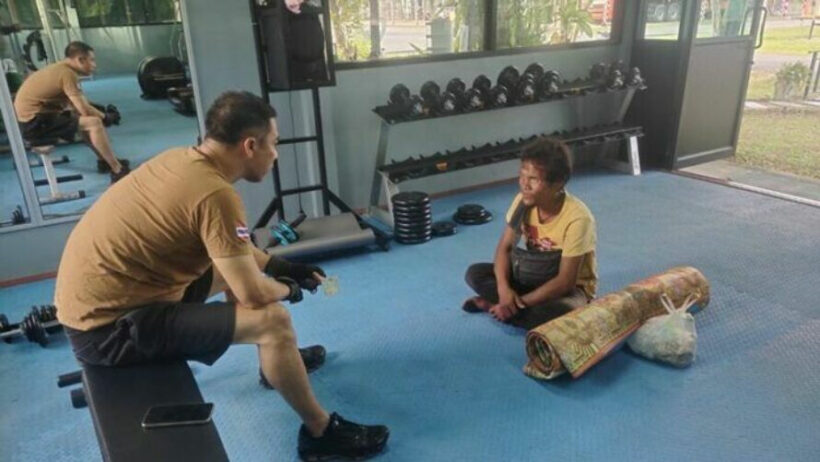 A man who lost his job in the southern province of Songkhla decided to walk all the way back home to Buriram in northeast Thailand. After 12 days of walking, the 42 year old man stumbled across an army barracks in Phatthalung province, the next province along, on Sunday. The soldiers took care of him and paid for his train ticket back to Isaan.

Buriram-born Choi moved to Songkhla about seven months ago to work at a rubber plantation in Na Thawi district. He planned on making money to send home to his family back home in Isaan. At first, he made around 300 baht per day cutting down rubber trees.

As the months passed by, Choi said that work became scarce and he was hardly making any money at all. He wasn’t sending money back home as planned and he missed his 11 year old daughter and grandma, so he decided to return home on September 5.

However, Choi had no money or phone, so he was forced to undertake the journey – which would take at least 18 hours to drive – on foot.

Choi walked 300 kilometres in 12 days, sleeping at temples along the way, where Buddhist monks gave him food and water. In the almost two weeks he spent walking, he only crossed one provincial border.

On Sunday, he stumbled across an army barracks in Phatthalung province and stopped to ask for some water. At first, the soldiers thought he was a criminal of some sort and brought him in for questioning.

The army told Choi that they would pay for his plane ticket to fly back home to Buriram. However, Choi said he wasn’t sure how to take a plane. Instead, the army gave him 1000 baht cash and dropped him off at the train station.

Choi took a 13 hour train all the way from Phatthalung to Hua Lamphong Railway Station in Bangkok. From there, he took an eight hour train from Bangkok to Buriram.

Upon arrival in Buriram, Choi’s 81 year old grandma La tied string around his Choi’s wrist as a gesture of gratitude. La said she felt pity that her grandson had walked 300 kilometres across southern Thailand.

La thanked the army for helping Choi and wondered how long it would have taken him to get home if he walked the whole journey. The distance between Songkhla and Buriram is 1,350 kilometres.

Celebrating the Vegetarian Festival 2022: where to go and what to eat