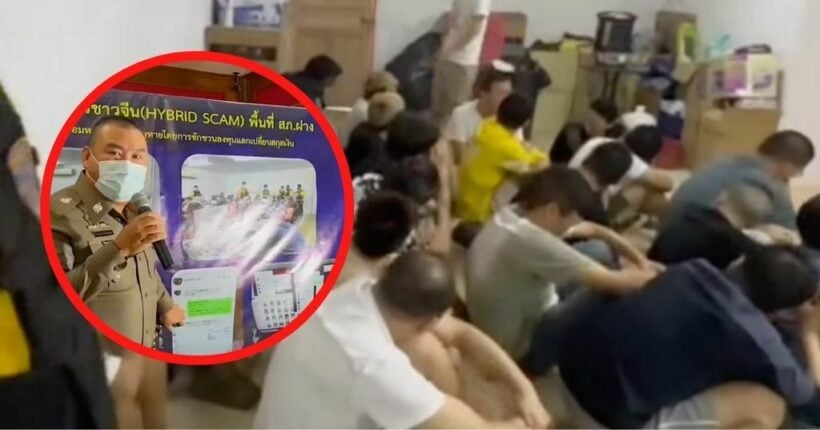 Police yesterday revealed that a Thai-Chinese gang had been arrested in Chaing Mai for operating illegal dating scam activities after a tip off.

Police apprehended 24 people after a member of the public alerted authorities to a group of Chinese men behaving suspiciously at the luxury Chaing Mai holiday resort. The gang included 20 Chinese and 4 Thai, 2 of the gang were women, three of the Thai criminals weren’t legally registered in the country, while the Chinese offenders were all in the country illegally.

Director of Combating Transnational Criminal and Illegal Immigrants Center, Witsanu Prasartthong-o-sot, revealed that officers had been monitoring the actions of the group staying in Chiang Mai’s Fang district, and obtained a warrant from the court to search the premises of BK Resort and BK Coffee in Moo 7, Tambon Mae Soon, before making the arrests.

The investigation uncovered the gang’s covert plot to scam both Thais and foreigners to invest in a fake trading application named Metatrader via dating apps. The group set up hundreds of fake accounts with pictures of beautiful women to lure their victims. Once the victims transferred their money the fake women would cut off all contact.

The suspects explained to police that they were paid around 25,000 to 30,000 baht per month. They rented an apartment at the resort together and worked at the office behind the retreat from 9am to 9pm on weekdays, and 12am to 5pm on weekends.

Witsanu revealed to Thai media that they would be further investigating the 20 Chinese suspects on their legality to be in Thailand. All of the suspects were charged for forming a conspiracy to defraud people, impersonating themselves as others to fool people, and developing a fake computer system to trick people.