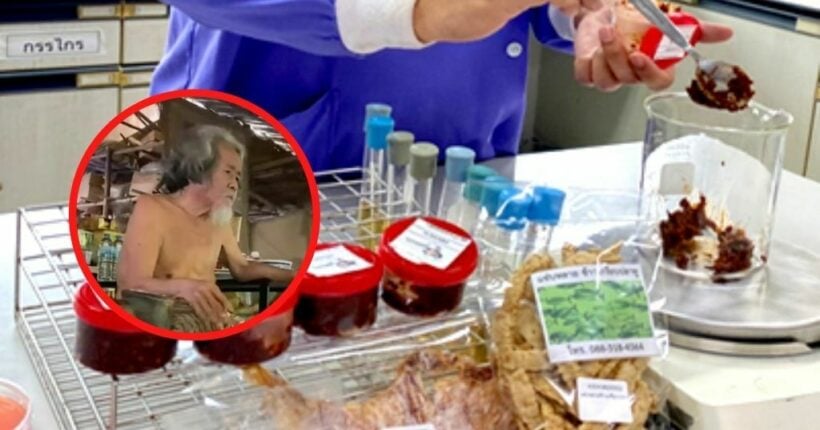 Local health authorities found the cult was operating a food businesses and seized all of the products for further investigation. The test results showed that the food samples from the group contained excessive amounts of mould, Coliform and bacteria, usually found in feces.

At the start of this month, the cult was raided for the first time by police, residents after the story of the elderly and eccentric cult leader had gone viral on Thai social media. The 78 year old cult leader, Tawee Nanla or ‘Joseph’, was reported to lure followers into believing in his magical power and, amongst other demands, required to his adherents, to consume his feces, urine, skin flakes, saliva and used cigarette butts. The followers even wasched their faces with the human lymph from 11 corpses that had been kept inside the compound.

The cult leader was charged and brought to a police station for further questioning. The corpses found in the compound were identified and returned to their relatives for cremation or burial.

The Deputy Governor of Chiyaphum province, along with other authorities and the local media in tow, revisited the compound a week after. They found that the cult had operated a food business and distributed products to various local shops in the province. On the menus were food products like chili paste, fried green peas, fermented fish, and various snacks. All of the products were identified as being produced with poor hygiene standards and weren’t approved by the Food and Drug Administration. The cult was ordered to stop its food operations, and all products from every shop were seized for further investigation and lab testing.

Yesterday, the Director-General of the Medical Sciences Department, Suppakit Siriluck, revealed the test results to the media. He said 3 products, including fish crisp, deep-fried green peas, and dried squid had mould that exceeded the country’s standards. The other 28 products, like chili paste, fermented fish and herbal tea, were still under investigation and awaiting final test results.

Supapakit told the media that the Escherichia coli and Coliform bacteria were detected in the sample of water collected from the cult compound. Health authorities confirmed that these bacteria were the cause of gastrointestinal disease, diarrhea and food poisoning. The doctor from Chiyaphum Provincial Public Health Department, Wachira Botpibun, explained that the long term consumption of these bacteria and mold could cause various cancers and even death.

The self-proclaimed cult leader, Joseph, could face a fine of up to 60,000 baht and 3 years of jail time. He was charged for manufacturing food products without permission and using food labels that hadn’t been formally registered.

He is currently on bail and has moved his cult compound from Chiyaphum to another Isaan province, Loei, near the Laos border. Aside from the test results, Thai media also report that Joseph had filed a complaint to the police against the Chaiyaphum governor, saying the authority broke into his compound and wrongly performed their duties.

PHOTOS: Bureau of Information Office of The Permanent Secretary of MOPH

Thailand could drop its mask mandate by mid-June, says Ministry of Public Health