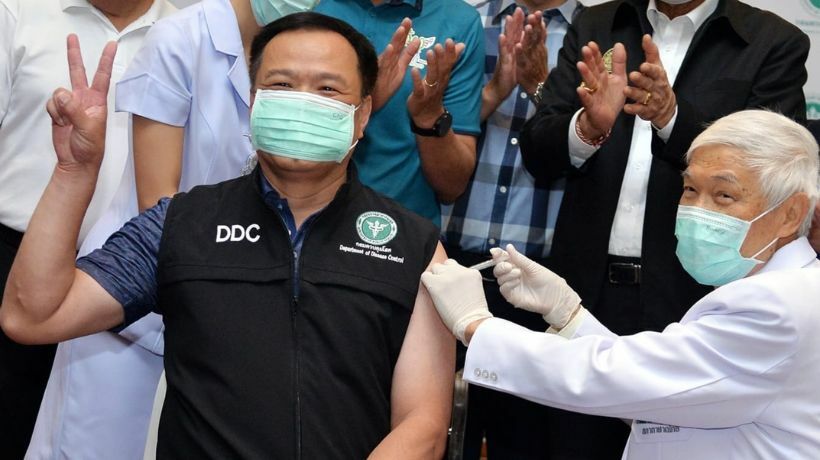 A Thai doctor and netizens have questioned the Covid-19 treatment plan in Thailand after the Deputy PM and Public Health Minister Anutin Charnvirakul received a Molnupiravir shot even though he only had mild symptoms.

The Department of Medical Services insisted that no special privileges were involved and the politician received the vaccine because he is considered to be in a high-risk group due to his obesity.

The Molnupiravir vaccine can help reduce the severity of coronavirus and death rates by about 30%. Three months ago, the Department of Medical Services announced that Molnupiravir was included in the kingdom’s Covid treatment plan. The medicine would be limited to only Covid patients in high-risk groups like the elderly and patients with chronic diseases due to the medicine’s high cost, which is about 10,000 baht for one patient.

Yesterday, The Thaiger reported that Anutin tested positive for Covid-19 after travelling back from a meeting in Geneva, Switzerland, on June 26, despite having received 6 vaccines.

The Thaiger made it known that the minister now has to quarantine for a week after taking the Molnupiravir drug.

Thai netizens focused on the treatment offered to the minister and were curious as to why he got preferential treatment.

The Head of the Precision Medicine Centre of Mahidol University, Manop Pithukpakorn, today says he too is curious about the treatment. He posted on his Twitter account asking, “If ordinary people are infected, would they get the same medicine or receive green chiretta, or Favipiravir, which research revealed wasn’t as effective.”

The Director-General of the Medical Services Department, Somsak Akkasilp, explained the issue after the post went viral. Somsak said that Anutin received Molnupiravir according to the Thai Covid-19 treatment plan and standard.

“The Deputy PM is overweight or obese, and obesity is one of the risk conditions.”