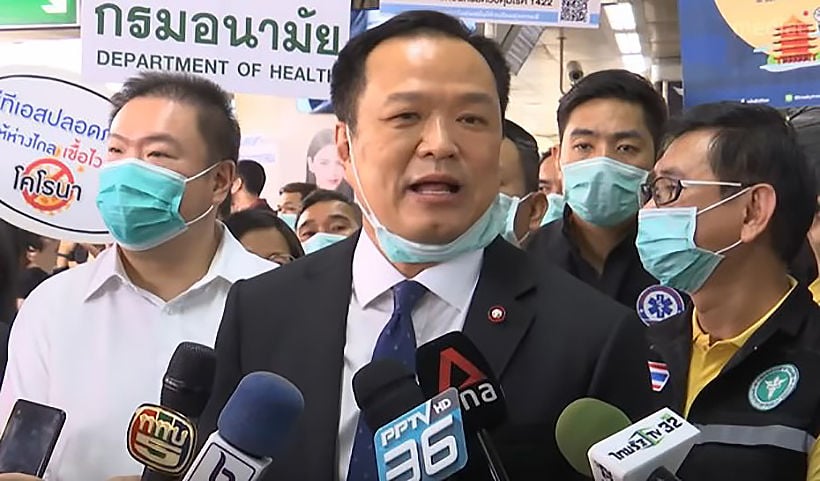 The Thai Deputy PM and Minister of Public Health, Anutin Charnvirakul, has tested positive for Covid-19 after arriving back from a UNAIDS meeting in Geneva, Switzerland. The minister was reported to have only mild symptoms at this time as he had already completed 6 doses of Covid vaccine.

Autin and other authorities from the Ministry of Public Health, Foreign Affairs, Thailand Convention and Exhibition Bureau, and Phuket Provincial Governor had joined the BIE 170th General Assembly in Paris between June 19 – 20.

Then, the group travelled to Geneva to join the meeting with The Joint United Nations Program on HIV/AIDS to discuss the Special Expo 2028, in which Phuket is vying to host between June 21-24 in that year.

Anutin arrived in Thailand on June 26 with muscle pain and a sore throat and later found that he was positive for Covid-19 with an ATK test. According to the report, the minister would quarantine for at least a week, or until he was able to produce a negative Covid test.

The Permanent Secretary of the Ministry of Public Health, Kiatiphum Wongrajit, who travelled together, also tested positive and had similar symptoms.

The report from Channel 3 explained that the two men were likely to have been infected while working aboard because they had to meet and talk with many people. Both of the men were fully dosed with approved Covid vaccines before their travels.

Anutin once said in an interview to the media…

“I need a thick armor because the Covid-19 can stab me anytime while working”.

He received a Pfizer vaccine as his 6th dose on June 13, just prior to his departure to Europe. Overall, he received 2 doses of SinoVac, 2 doses of AstraZeneca, and 2 doses of the Pfizer mRNA vaccine. After his 6th vaccination he continued working immediately without any side effects.

Kiatiphum claimed that “this proved that the Covid-19 vaccine was safe and important because it could effectively help prevent severe symptoms and death after infection”.

For foreigners the mercurial public health minister is infamous for his comments about foreigners when he was handing out free face masks in the early days of the pandemic in Thailand.

“Many farang dress dirty and don’t shower. As hosts we have to be very careful.”

Anutin’s disparaging and xenophobic comments about ‘white’ foreigners (farang) made international headlines at the time.

“Today I visited Chiang Mai and noticed that there are almost no Chinese tourists. All you see are ‘farang’. Not only that, but 90% of Thais are wearing masks. However, none of the farang are wearing masks This is the reason our country is being infected all around. We should be more careful of the farang than Asians.”

“At the moment it is winter in Europe and farang come to Thailand to hide from the disease. Many farang dress dirty and don’t shower. As hosts we have to be very careful.”