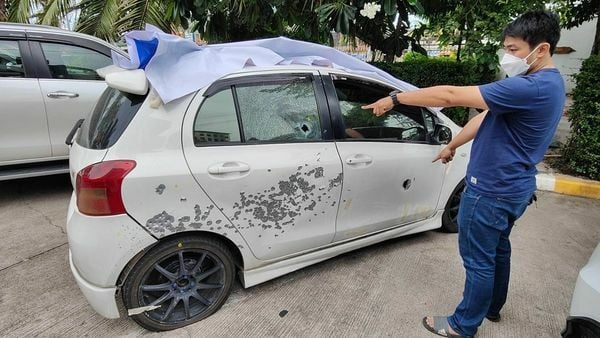 A Thai man escaped with his life after an argument with his girlfriend turned into a scene from a gangster movie.

Teerapan Mulma got into a row with his girlfriend at a party on Sunday, July 3 at Pattaya Waterworks Authority in Pattaya, which spiraled into a shootout.

The 34 year old was enjoying drinks with his girlfriend and a party with 6 other people who worked at the waterworks when an argument broke out and police were called.

Teerapan told his girlfriend they were leaving but she refused to follow him so the Thai Oil Company employee went home alone.

A few hours later at midnight, after he had calmed down, Teerapan called his girlfriend to apologise and asked her to come home but she refused.

“I was with a group of friends within the waterworks, about 6-7 people, but there was an argument and my girlfriend would not return with me. So, I went home. I was going to inform the police to check the place but later that night I called my girlfriend. I said I hope you have a good night before talking to a man I did not know. We argued and then challenged each other.”

The argument resulted in the man turning up at Teerapan’s house looking for a fight.

Teerapan chased the man away with a knife and then jumped in his car and went looking for his girlfriend at the waterworks site at 4.30am.

To his surprise, another car pulled alongside his parked white Toyota Yaris and a group of men jumped out, one with a gun, and started spraying the side of the car with bullets. Teerapan managed to make an escape from the vehicle but the gunman continued to pepper the white car with bullets.

Banglamung Pol Col Navin Sinthurat reported that the bullet holes in the victim’s sedan came from a shotgun and the cause of the incident stemmed from a personal dispute.

“I hastened police to investigate and collect evidence. The reason for the dispute is not yet clear and we cannot rule out the issue of adultery and other issues which must be investigated. But soon the perpetrator will be prosecuted according to the legal process.”