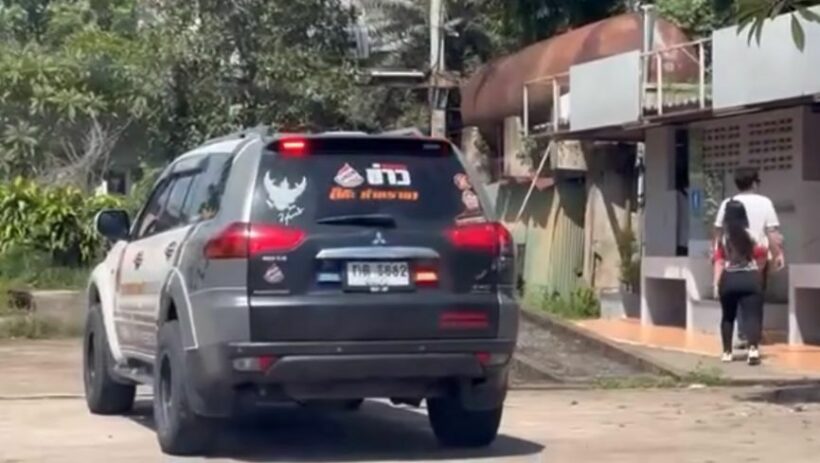 Thai netizens made it known there were outraged by the owner of a black SUV car that traveled at high speed and used a siren – just to use a toilet.

Dashcam footage of the SUV was posted on the Facebook page Let Me Know If You Want to Be Famous Return Part 3.

“This car turned on its siren and lights to pass other cars on the road. The car did this from Pathum Thani to Nakhon Nayok province. There was no emergency or road accident on August 14 at 2pm. It’s the road near the Nakhon Nayok Provincial Land Transport Office. ”

According to the location given in the post, the incident was on Rangsit-Pathum Thani Road in the central province of Nakhon Nayok.

The video revealed the SUV driving at a high speed, overtaking every car on the road with red lights flashing at the back, and the siren turned on and off along the way.

The driver recording the video followed the SUV until it parked outside a petrol station toilet. Three passengers got out of the car and went into the toilet. They didn’t seem to be in a hurry.

It is believed the car belonged to a government state department or some state news reporter because the back of the car showed a garuda sticker, which is the national emblem of Thailand, a Thai flag sticker, and a word sticker that read ข่าว which means news. Some parts of the video also show that the SUV has a sticker saying Fire & Rescue Volunteer of Thailand.

According to the Land Transport Act, drivers have to obtain a permit from the Royal Thai Police before installing an emergency light and siren. That permit expires after three years.

Anyone who uses flashing lights or a siren inappropriately could face a fine of up to 1,000 baht.