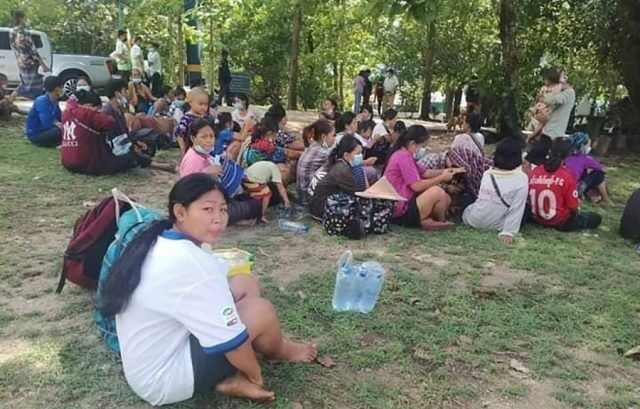 A Thai security official says that Thailand is giving humanitarian aid to Karen refugees who have fled to the Burmese-Thai border following a new wave of fighting between Karen rebels, and Myanmar’s junta forces. National Security Council secretary-general Supoj Malaniyom says Thai provincial authorities will set up a shelter to care for the hundreds of Karen refugees.

This news comes after the Karen Liberation Army and allied forces seized control of a strategic camp from the Burmese junta military earlier this week. The fierce battle over control of the camp reportedly lasted 8 hours, and witnesses say the Burmese military launched at least 35 air strikes. Three soldiers from KNLA and allied groups were killed, according to a statement by one allied group, Cobra Column.

Supoj said that NGOs are also helping give aid to the refugees, and the refugees are being screened for Covid-19. He said the refugees will be sent home if they wish when the situation improves.

This wave of Karen refugees on the Thai border is just the latest of several. In March, about 1,000 Karen hill tribe people crossed the border into Thailand, only for Thai authorities to send them back, according to an official from a refugee camp.

The UN, and other human rights groups, have accused Myanmar’s junta government of war crimes and crimes against humanity. These crimes, they say, have especially targeted minority groups, including the Karen people. In March, the UN High Commissioner for Human Rights accused Myanmar’s army of burning alive women and children in the Kayah state, a Karen-majority state.