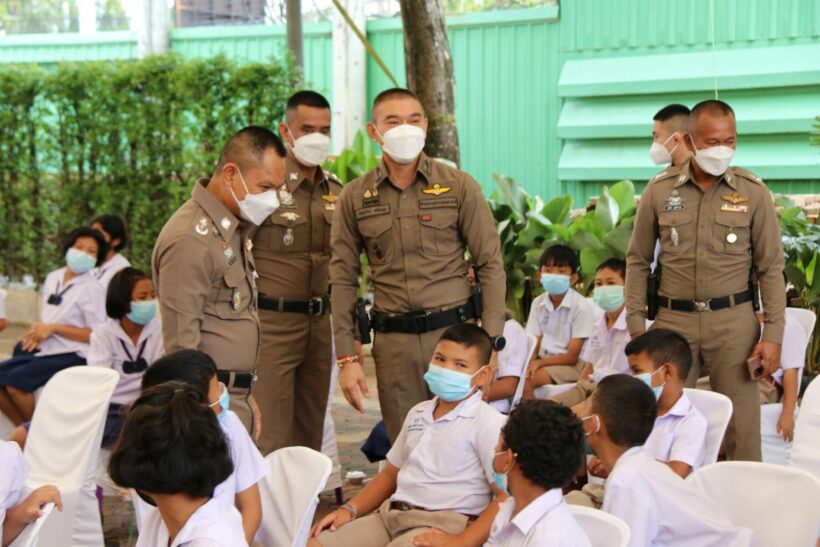 Thai police say they are supporting a new approach to drug abuse, following an anti-drug campaign event in Phuket yesterday. The deputy inspector general of Royal Thai Police said the campaign in Phuket’s town of Karon follows a nation-wide shift in the country to get drug users treatment instead of jailtime.

Karon’s police chief said at the event that every police station in Thailand is to have a “sustainable community action project” to solve drug issues. Royal Thai Police Deputy Inspector Panurat Lakboon said that this year, programmes are being introduced in 1,483 communities across Thailand.

Karon Police will focus on a particular area of the town for its community anti-drug campaign. Officers will visit every household in Baan Khok Chang to prepare to draft a Memorandum of Understanding on drug testing, according to Karon Police Chief Theerawat Liamsuwan. Theerawat said…

“If there are no addicts in the community, there will be no suppliers. This will make the community become a strong, drug-free community.”

The director of the Karon Health Promoting Hospital, Teerayut Ariyaudomkit, said that after addicts have voluntarily entered the treatment process, health officials will design their health plan “according to the severity of their condition”.

Panurat noted that the government is providing 50,000 baht to each community that the project is serving. He said that the budget alone is not enough to provide patients with comprehensive treatment, so it is crucial to work with local networks and leaders to expand the project. He said there are currently 300,000 people imprisoned, and 80% of them are serving drug-related sentences.

Meanwhile, officials in Phuket’s Kathu district have also stepped up to fight drug use. Last week, teens and pre-teens in the district were invited to compete for the best anti-drug slogan from June 15-27. The grand prize winner who comes up with the best slogan will receive 10,000 baht in cash and a voucher for accomodation and food at Patong Bay Resort Hotel valued at 5,000 baht.

Time will tell if such initiatives are effective in fighting drug problems in Phuket, and beyond.