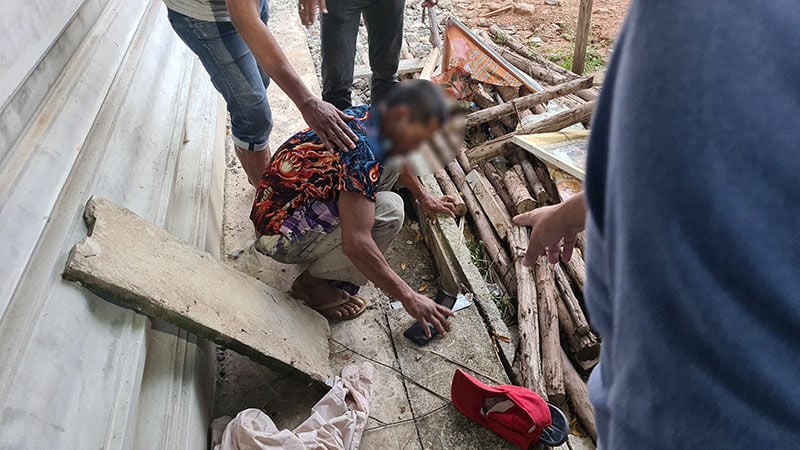 Pinyo Suwanno, who helps out at a temple near Niphat Songkhro 2 Road, Hat Yai Municipality, Songkhla Province, confessed to killing 47-year-old Thammarit Ngamchom because he overheard him plan a robbery of the temple.

The 48 year old alleged murderer, also known as Wat Koh Sua, who lives at Wat Sisawangwong, revealed he overheard Thammarit talking to friends on the phone on a marble bench in front of Phrapariyattham School that it was safe to rob the temple as the abbot and monks had gone to sleep and that about 400,000-500,000 baht in cash was kept inside the temple.

Pinyo said it filled him with anger so he grabbed a wooden staff and bludgeoned Thammarat over the head three times killing the man on the spot. He then tied a loincloth around Thammarat’s neck and dragged the body into the bushes behind the dharma school inside the temple and left it there.

Thammarat’s body was found by monks on Sunday who had gone out to offer alms.

Police found Thammarit dead in the forest garden behind the school inside the temple, lying face down, wearing brown trousers, and a red sports shirt. The body was covered with vinyl sheets and his feet were sticking out.

The initial autopsy revealed there was a hole in the dead man’s head that looked like it had been stabbed with a solid object. There was a loincloth wrapped around his neck and the man probably died at about 6pm on Saturday.

Thammarit’s mother and brother came to see the body at the scene and made it known that he suffered from depression and had previously suffered from a nervous breakdown, adding he usually stays at home and doesn’t interfere with anyone.

Pinyo was taken back to the temple for a re-enactment, charged with murder, and detained at Hat Yai police station for further legal proceedings.

Officers from both Hat Yai police station and Songkhla Provincial Police investigation team reported they would check CCTV footage from the house area of where Thammarit lived and inside and outside of the temple area before concluding the case.

5 incredible beaches in Phuket to visit in 2022