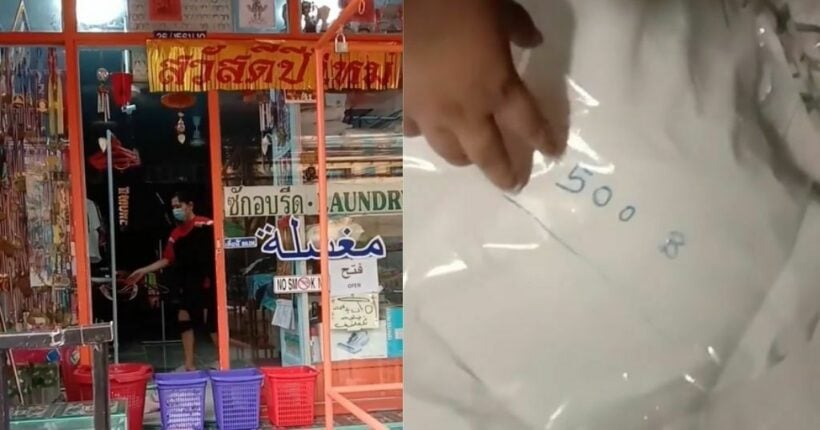 A Thai woman is complaining about a local laundry overcharging for services on social media. Her foreign boyfriend was charged 500 baht for only 11 pieces of clothes at a laundry shop in the city.

On May 15, the woman posted in a Facebook group named พัทยา or ‘Pattaya’, saying… “My boyfriend bought 7 shirts, 2 short pants, and 3 pieces of underwear to a laundry shop and faced a fee of 500 baht. My boyfriend is a foreigner, but is this too expensive for a foreigner? I asked many people, and they all said it was too expensive. It should be about 20-30 baht per piece, maximum. Do not step into this shop because the service is for rich people only. The shop owner said my boyfriend’s body was too big, so she had to charge more. His weight is only 75 kilograms!”.

The woman also included videos of when she fought with the laundry manager until she got kicked out of the shop. She also added the shop’s location, saying it was located in Sai 2 Soi 17 of southern Pattaya.

Many Thai netizens commented on the post and agreed with the woman that the fee was too much and boyfriend wasn’t “too big” at all. Some said they bought a whole basket to a shop, and it cost them only 200 baht (The Thaiger thinks around 200 baht for a basket is ‘average’).

Some said that 500 baht was what they paid for a monthly laundry service. And other said they faced the same issue at this shop too. Many people warned other shops to avoid overcharging because it could affect the image of Pattaya and chase the tourists away.

Either way, the laundry service has had a lot of free publicity!

450 charging stations for electric vehicles by the end of 2022