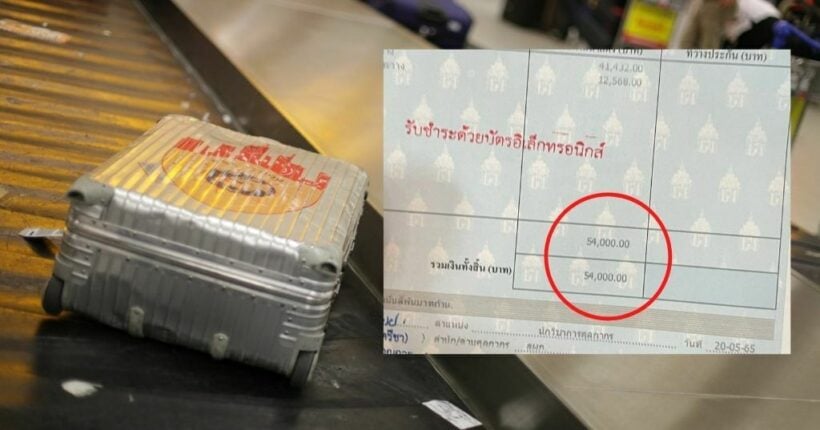 A Thai woman was fined 54,000 baht at Suvarnabhumi Airport for wearing designer brands and travelling with luxury products in her luggage.

The woman, now based in South Korea, was stopped by customs officers as she passed through the airport on Friday, May 20 with her foreign boyfriend. It was the first time in two years she had visited her native Thailand.

Custom officers asked the couple to stand aside while they rummaged through their three suitcases and two carrier bags, checking luxury items such as clothing, shoes, hats, and sunglasses.

The furious woman revealed the officers even asked the couple to remove the luxury items they were wearing.

One officer intimated the couple had intentions to sell the products at a profit, which she denied. The woman told the customs officials the clothing they travelled with was for personal use and asked them to smell the items as proof.

Another officer told them every luxury item would be seized because people couldn’t enter the country with more than 20,000 baht of assets. He added that they could face a blacklist if they refused to follow the rules.

After much delay an officer fined them 27% of the product price of their luxury bags and 37% on their clothes. Initially they were asked to pay 70,000 baht, before a discount left them with a 54,000 baht fine.

The woman issued a warning to others entering Thailand with luxury brand items, and added the Thai authorities didn’t have a right to fine foreign tourists like this. Many Thai netizens came out in support and revealed they too had suffered similar experiences and consequences. One woman said she was fined 60,000 baht, while another revealed she was charged 100,000 baht for her Channel bag. She decided to let the airport keep it and claimed it back when her holiday ended on leaving Thailand.

The story went viral on Thai social media after the woman posted her story on Facebook.

The best private villas to rent in Bangkok for 2022