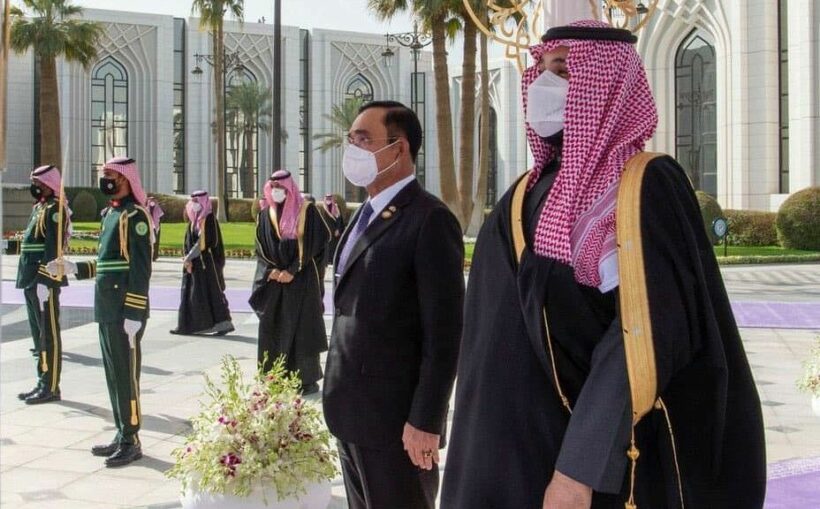 Following a meeting yesterday between Thai PM Prayut Chan-o-cha and the Saudi leader, Crown Prince Mohammed bin Salman, both countries have agreed to restore diplomatic ties in the near future. The Bangkok Post reports that Thailand and Saudi Arabia will exchange ambassadors as part of the agreement.

Things have been frosty between the two countries since a diplomatic spat over a jewellery theft in 1989. After Thai janitor, Kriengkrai Techamong, stole gems worth around US$20 million from the Saudi royal family, shipping them home to Thailand, relations between both countries rapidly soured. Saudi Arabia downgraded diplomatic relations with Thailand in what was referred to as the “Blue Diamond Affair”.

Some of the jewels have never been recovered, including a prized blue diamond. To this day, the theft of the jewels remains one of Thailand’s greatest unsolved mysteries, with some of the kingdom’s top police generals implicated in the bloody trail that followed.

A year after they were stolen, 3 Saudi diplomats were murdered in 3 separate assassinations on the same night. This was followed by the mysterious disappearance of Saudi businessman Mohammad al-Ruwaili, a month after he witnessed one of the assassinations. In 2014, a senior police officer and 4 others charged with al-Ruwaili’s murder had their case dismissed by the Criminal Court.

In a statement yesterday, the Thai PM expressed his regret over the events, adding that his government was prepared to, “raise cases to the competent authorities in the event of new, relevant evidence”, according to the Bangkok Post report. Thai officials have been anxious to restore full ties with Saudi Arabia, with the 3 decades-long diplomatic row having cost billions of dollars in lost bilateral trade and tourism revenue, in addition to the loss of thousands of job prospects for Thai migrant workers.

Following the meeting, Saudi Arabian Airlines took to Twitter to confirm it will restart direct flights to Thailand from May.

China donates US$19.5 million worth military equipment to Philippines